Identification and Management of Seed Disease on Soybeans

In the past few weeks, we have had several calls and field visits dealing with disease on soybean pods and seed.  A few have been in rough shape but by our observations and field trials to this point, most of the soybean crop has good seed quality. Fields impacted by fungal diseases typically had a combination of relatively greater rainfall, poor air movement due to surrounding trees and/or topography, and an unusually susceptible variety.  The following blog article will help identify the specific diseases/pests associated with poor seed quality in our state, help growers to manage issues that are discovered in fields and hopefully help mitigate these in future crops.

Some key points to consider: 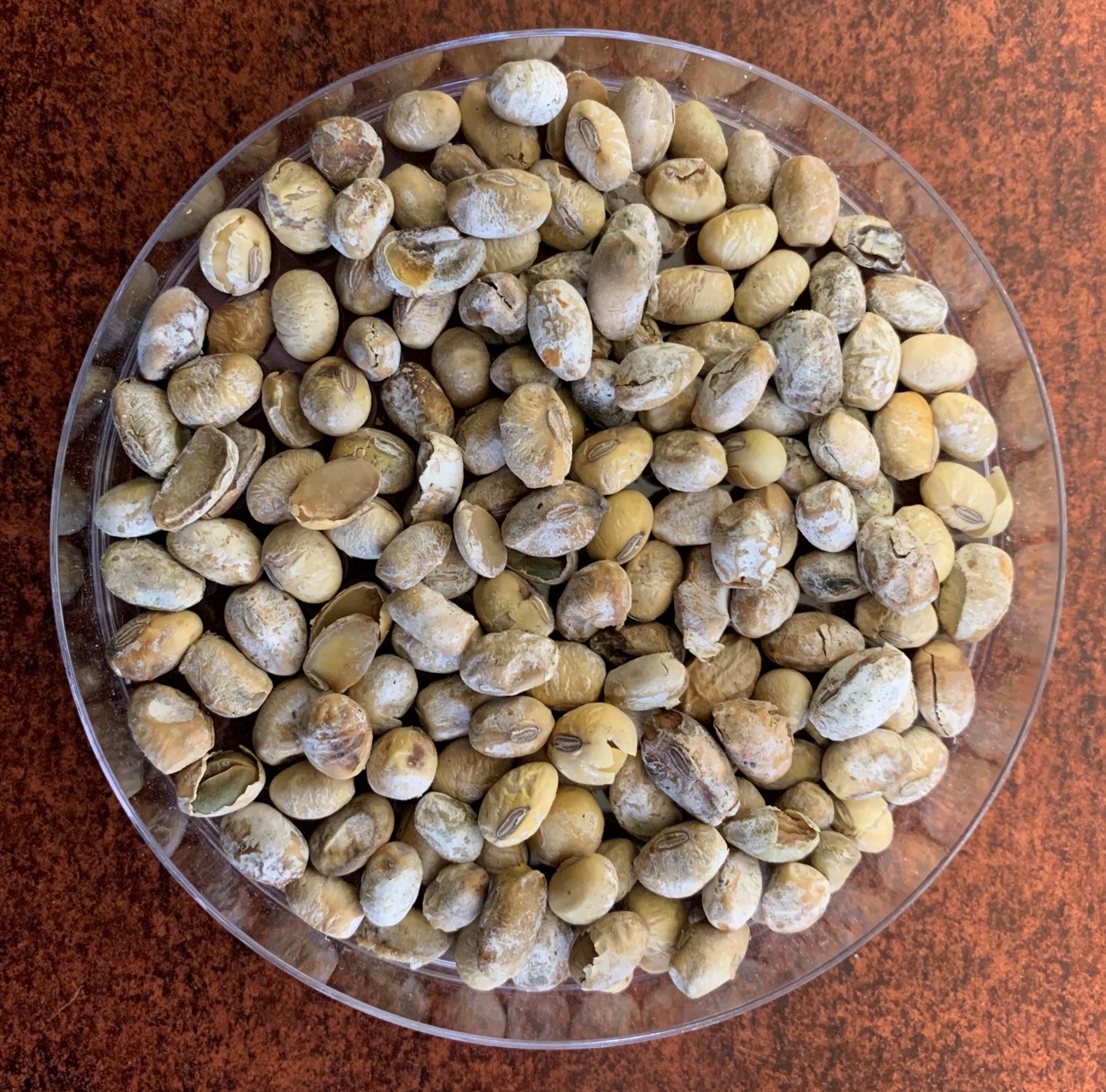 Phomopsis seed decay.  This disease is caused primarily by the fungus Diaporthe longicolla but can be caused by other fungi in the genus Phomopsis or Diaporthe.  The most observed symptoms of the disease are white-chalky and shriveled seeds, that tend to crack or split. Pods are also infected.  Seeds infested with Phomopsis seed decay tend to have a lower oil content as well.  This pathogen is present in most, if not all, soybean fields in Arkansas but the severe disease occurs primarily due to hot humid weather during pod fill or prolonged warm wet conditions after maturity.  When the disease is severe, yield losses can occur, and significant dockage can be expected due to poor seed quality. Image by Amanda Tolbert. 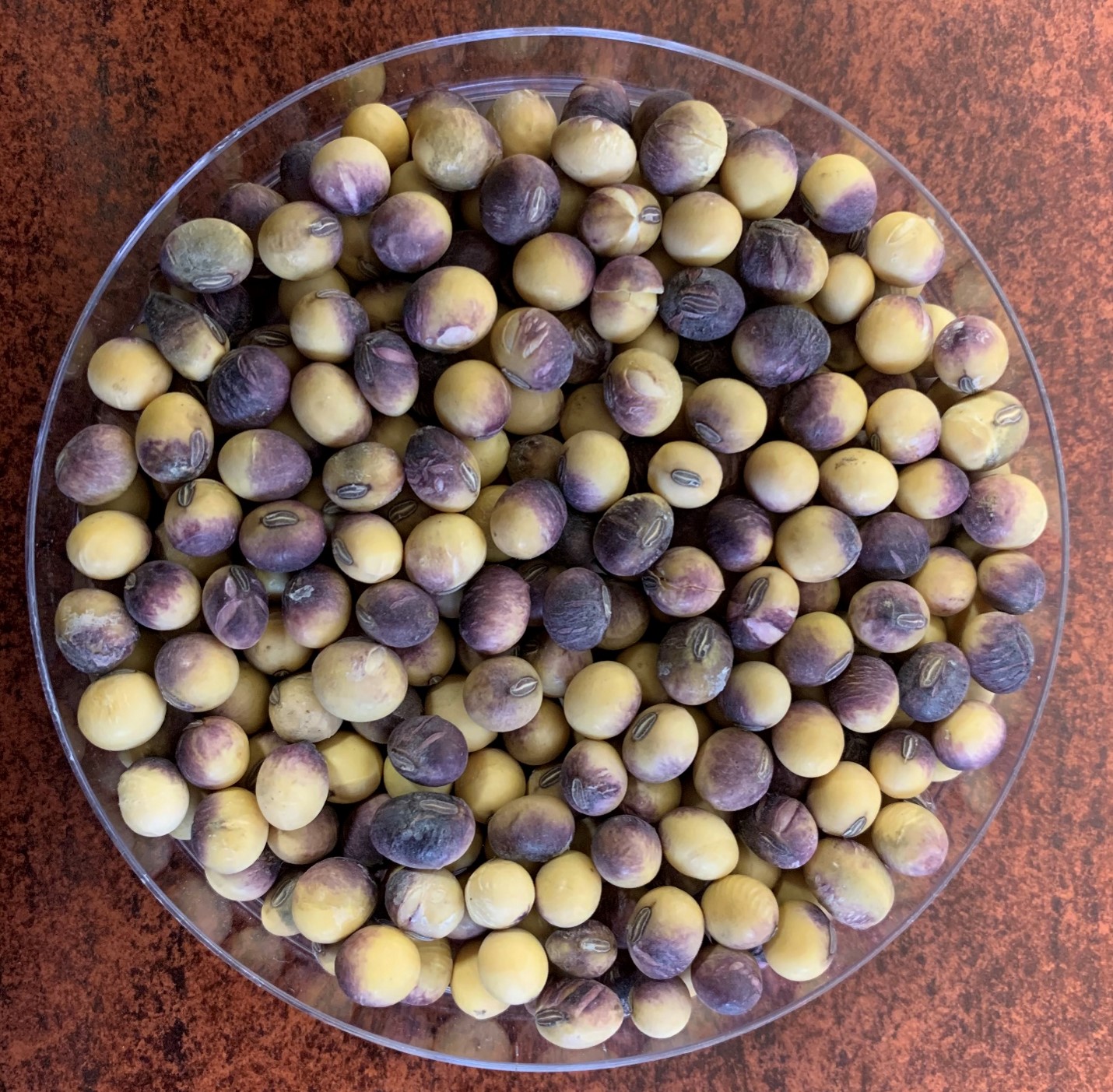 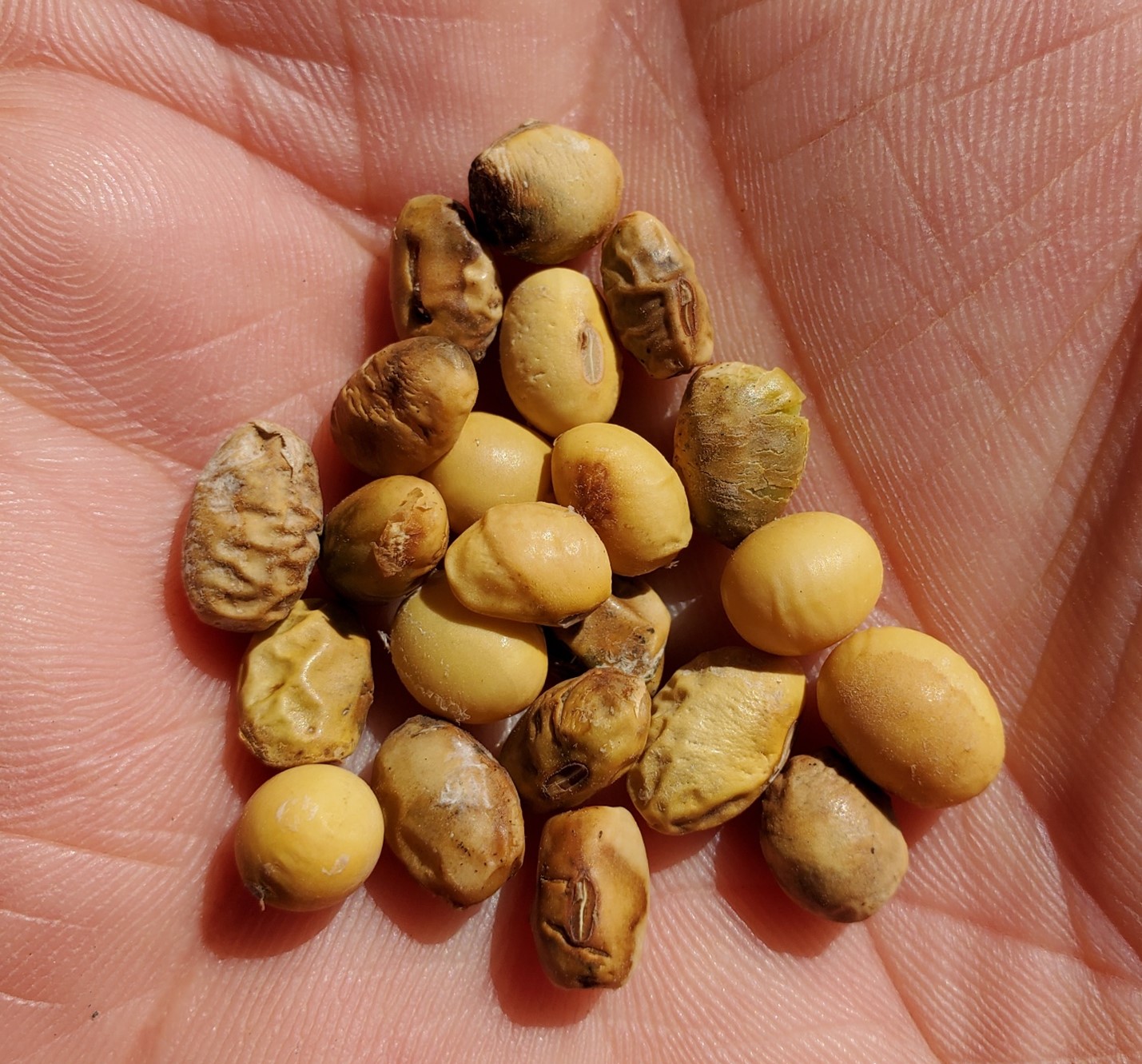 Frogeye leaf spot.  The fungus that causes frogeye leaf spot, Cercospora sojina, can also infect petioles, pods, and seed.  The image above was from a recent field visit where the variety in question was susceptible to frogeye leaf spot.  The seed quality in the field was very poor and without the typical symptoms associated with other more commonly observed seed diseases in Arkansas.  Plant damage caused by frogeye leaf spot can be avoided by planting varieties known to be resistant to the disease. Image by Terry Spurlock.

Varieties can differ in their overall tolerance to common seed diseases.  Each year, we determine the amount of Phomopsis seed decay and purple seed stain on many commercial varieties and experimental lines planted at Rohwer Research Station.  There are always numerical differences and generally high variability with some varieties having very little or no Phomopsis seed decay or purple seed stain while others have much more. For the management of these diseases, we can use annually generated data from variety tests, but this becomes difficult for growers as there is a high turnover of varieties in the marketplace and many varieties do not get placed in the official variety tests for a second or third year.  It is difficult to make good recommendations on a single year of data.  Still, some data is better than no data.  Being as informed as possible on the varieties that you choose to plant is the best advice we can give you. There have been sources of genetic resistance identified for Phomopsis seed decay and purple seed stain, but varieties that may have these sources are not normally identified in seed company literature.

Another consideration for the management of seed diseases is the time from maturity to harvest.  As a rule, nothing good can happen to soybean plants once they mature.  The longer that they sit in a field unharvested, the higher the likelihood that the seed can deteriorate from a combination of poor environmental conditions and pest pressure.  In our variety tests, we typically have a range of relative maturity groups from late MG III to late MG V, and these almost always get harvested on the same day.  Below, the data from last year’s test shows earlier maturing varieties tended to have more seed disease than those maturing later.  This could have been caused by two factors: 1) the weather at the time of maturity was more conducive for disease development and/or 2) the longer time from maturity to harvest allowed more seed disease to develop on earlier maturing varieties.  Regardless of either being the cause, a timely harvest is a good idea. 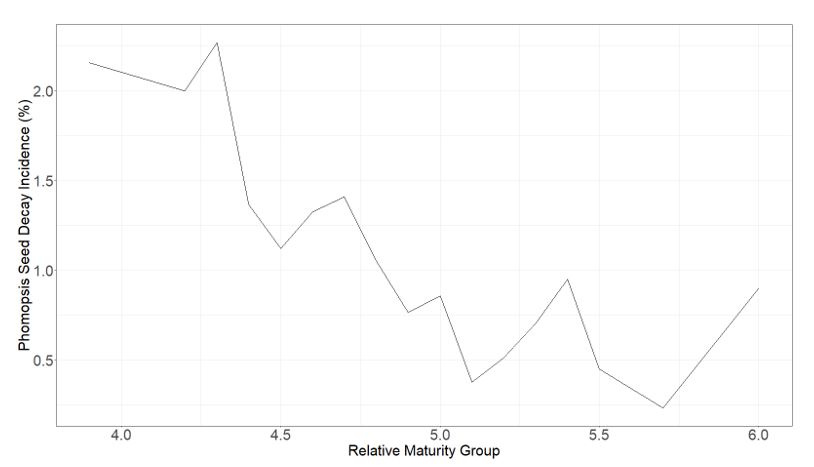 Figure 1.  The percent (%) incidence of Phomopsis seed decay from a variety trial containing 175 different varieties at Rohwer Research Station in 2020.  The incidence of seed disease was slightly higher in the varieties that matured earlier and remained in the field for a longer time period until being harvested.  All varieties were harvested on the same day. 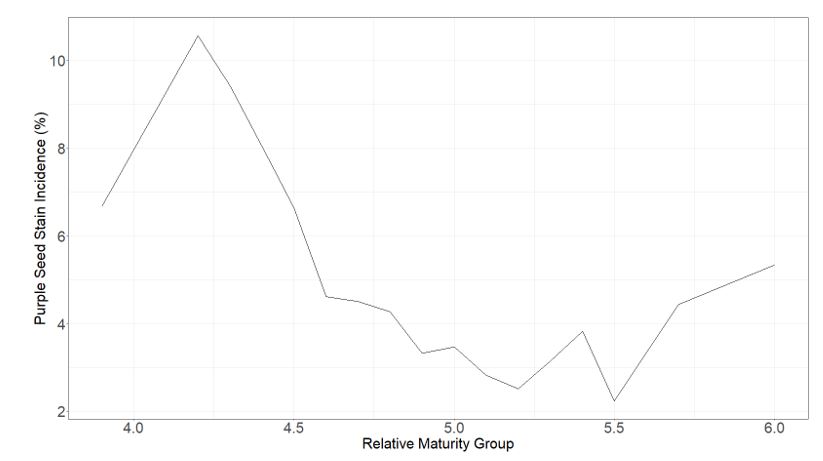 Figure 2.  The percent (%) incidence of purple seed stain from a variety trial containing 175 different varieties at Rohwer Research Station in 2020.  The incidence of seed disease was much higher in the varieties that matured earlier and remained in the field for a longer time period until being harvested.  All varieties were harvested on the same day.

The timing of fungicide applications can have an impact on fungal pathogens that cause seed diseases.  The findings of a trial conducted in 2019 on an earlier maturing variety demonstrate that an R5 application of Headline, Priaxor, or Topsin-M resulted in less purple seed stain than the untreated control while an R3 application was not significantly different from the untreated.  In another trial on a later maturing variety, there was less purple seed stain overall, and fungicide applications provided no better control than the untreated.  There were differences in Cercospora leaf blight severity.  Both trials were harvested at approximately the same time. Where seed disease was an issue, an R5 application was beneficial.

Table 1.  Fungicide trial planted in Credenz CZ 4105 at Vegetable Research Station, Kibler, AR. Treatments, growth stage at application, and percent pods (out of 10) and seed (out of 25) that when plated producing fungal colonies.

Table 2.  Fungicide trial planted in Credenz CZ 4748 at Vegetable Research Station, Kibler, AR. Treatments, growth stage at application, and percent pods (out of 10) and seed (out of 25) that when plated producing fungal colonies of known pathogens, and foliar disease severity ratings based on a 0-10 scale, where 0 = no disease, and 10 = dead plants.

Moderate to high populations of stink bugs have been observed in soybean this year. These have mostly been green stink bugs, with a few browns mixed in. Stink bugs are seed feeders and use piercing-sucking mouthparts to pierce the pod wall and feed on the developing seed. Damage to soybean seed from stink bug feeding can range from slight bruising and some shriveling to no seed at all (Picture 1). The severity of damage to seed has a direct relationship with the growth stage. A higher level of seed damage is expected when stink bugs infest soybeans at the R5-R6 growth stages. After R6 it becomes much tougher for stink bugs to cause quality and yield loss in soybean. Our current thresholds for green and brown stink bugs in soybean is 9/25 sweeps until R6 where it doubles to 18/25. We can terminate stink bug applications at R6.5. If we get into wet rainy spells as we have right now, you may consider not terminating until R7. 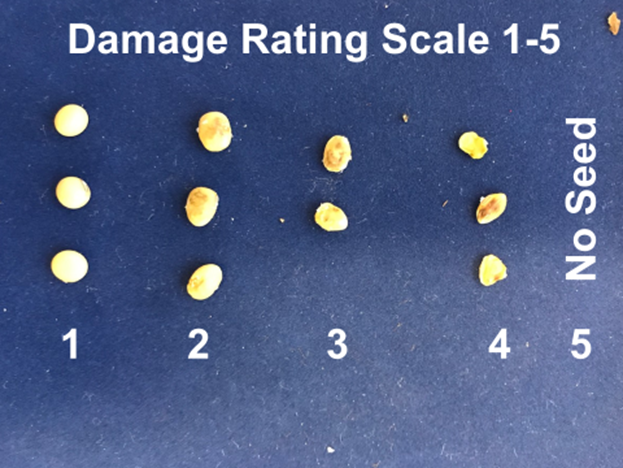 Picture 1.  In the photo above, you see a rating scale for stink bug damage in soybeans, ranging from no damage (1) to completely blank pods with no seed (5).

The research highlighted in this article is from a project funded by the Arkansas Soybean Promotion Board entitled “Determining the impact of disease and stinkbug feeding on soybean quality” with Terry Spurlock, Nick Bateman, John Rupe, and Alejandro Rojas as investigators.