“With these changes in latitudes, changes in attitudes, nothing remains quite the same.”

Change is in the Air

September is rice month for a reason.  The time for serious statewide harvest progress looks to be upon us.  We’ve had excellent weather the past couple of days and after a system moves through over the weekend, next week looks right to rock and roll.  Humidity dropping out while daytime highs still reach the 90s along with sun and a breeze.  What more can we ask for?

The past week has been filled with some frustration over seemingly ready-to-harvest fields that moisture refuses to fall out on.  Even in rice with moisture getting close, green kernels aren’t finishing up with the clouds and high humidity.  With how things typically go when this happens, moisture will begin to fall out and it will all be ready at once.

Comments on yields continue to be “average” or “a little under last year”.  For the most part there aren’t many commenting that they’re disappointed.  We seem to be doing well considering the tough year.  Until we move into harvesting our main planting window, we can’t really know for sure how it’s going to shake out just yet.

The one main area to comment on is the variability reported in row rice yields.  They seem to be all over the map.  While there’s nothing definitive to point at yet, it would seem reasonable to say it’s water related given the drought this year.  As in most cases, it’s probably not that simple, but more likely that we had a harder time watering and given the heat this year it created a “stress on stress” situation.

Milling yields are overall still better than last year, but maybe not drastically so.  It sounds like we’re in for an average milling year, but things could still improve as we go forward.

We’ve reached the point in the year where Rice Updates may not be provided every week, but will be sent out when we have information we think can be beneficial. 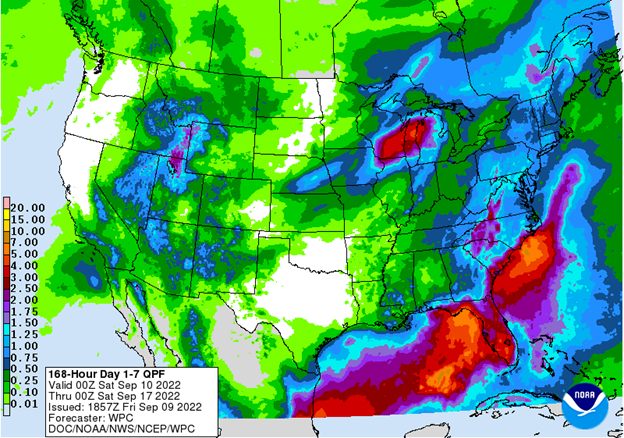 Each year there are questions about estimating rice yield lost out of the combine.  Table 1 provides the straightforward answer, but it’s not that simple.  The combine doesn’t spread residue as wide as the header in most cases (depending on how you set it), so simply counting the grains in a square foot behind the machine may overestimate or underestimate loss.

To be most accurate, you need to count the number of kernels in a strip the width of the header (Table 2).  For instance, with a 30 ft header, you would need to count the kernels on the ground in a strip 30 ft wide and 4 inches long (which amounts to 10 square feet).  Divide the kernels counted in that strip by 10 to get your number per square foot.

A simpler, and faster, approach is to think of the header width in sections.  For a 30-ft header, think of it as having three 10-ft sections.  Take a single square foot count in the center of each of these 10-ft sections, total the numbers and divide by three.  This will give you the number per square foot and capture areas to the side and directly behind the combine, while taking a third of the time as the traditional method.  Remember that when using this quicker method, you must be sampling in the residue swath – some set their combines to spread residue narrower or wider for various reasons.

Remember to count kernels on the ground in an area not yet harvested so that you account for shattered grain that isn’t being lost from the harvesting process.  Subtract any grain already on the ground from your harvest loss estimates.

The rice market is making solid gains to finish the week on news that India's government announced a ban on broken rice exports.  The ban goes into effect immediately, although some exports will be allowed until September 15th.  The Indian government also imposed some restrictions beyond the lower-grade rice.  A 20% export duty goes into effect on shipments of white and brown rice, which make up 60% of total exports.  Parboiled and basmati rice are excluded from the ban.

Recall in mid-May, India’s wheat exports were banned, and export restrictions were also placed on sugar.  In the past two weeks, a wheat flour export ban was announced.  This is all an effort to manage food price inflation.  India accounts for 40% of the world's rice exports.  For the 2022/23 marketing year, India was projected to export 22 million metric tons of rice, more than Thailand, Vietnam, Pakistan, and the U.S. combined.

Next week’s trading will focus on USDA reporting.  The monthly WASDE and Crop Production will be released Monday, September 12th.  NASS will include results of its’ first objective field surveys.  Also, some revisions to rice acres could be made based on the findings in FSA’s August acreage reporting.  Weekly Export Sales are expected to resume September 15th.

We continue to hear of U.S. nitrogen prices moving higher.  Industry analysts believe this is largely driven by nitrogen plant outages in Europe resulting from sharp increases in natural gas costs.  Also, it’s seasonal tendency.  Generally, prices for all major fertilizers stabilize in September and trend higher in the last quarter of the calendar year.  In addition to nitrogen, phosphates are starting to increase after several weeks of steady prices.  The potash market remains steady for now.  Expect this to change as wheat planting and fall fertilizer application gets underway.

In Monday’s Crop Progress, USDA estimated the U.S. rice harvest at 24% complete for the week ending September 4th, up from 18% the prior week.  Louisiana and Texas’ harvest had reached 75 and 81%, respectively.  Harvest momentum has slowed in Louisiana.  Following the late August rains, it is estimated there are 300,000 to 400,000 acres of soybeans damaged.  The sprouting that resulted has led to some deep discounts.  Elevators that were accepting damaged soybeans are said to be paying as little as $4 to $5 a bushel.