“It’s a mighty hard livin’, but a dang good feeling to run these roads.”

Briefly put, yield reports continue to be bright as we cross the mid-point of rice harvest progress in Arkansas.  Most seem very optimistic about their yields this year and there have been very few complaints about low-yielding fields or underperforming cultivars.  Perhaps the only general minor disappointment is that row rice fields haven’t performed as well for some this year as in recent years – more investigation will be needed on why that is, but like so many things this year the weather likely played a large role.

All of these add up to an expectation for a solid state average yield in line with the past several years.  That is, close to the state average yield record.  Could we surpass the record?  Well it’s possible, particularly given how close we’ve been to it for four years, but we still have a lot of rice to harvest to see if the pace continues to the end.

Milling yields have stabilized some at this point but would still be considered below average.  Hopefully we will see an upward trend as we get into harvesting later planted rice.  Only time will tell. 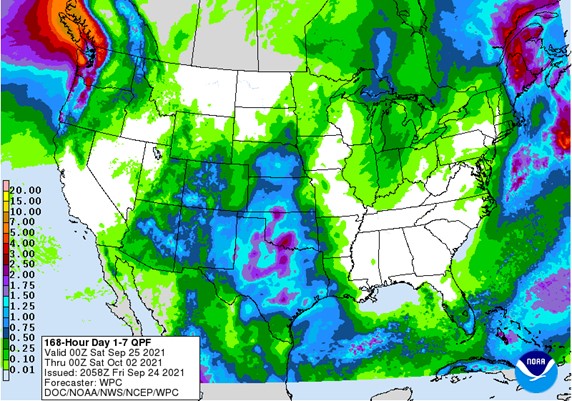 Reasons for low milling yields were touched on several weeks ago, but it bears repeating.  The heavy dews we’ve had over the past month or more have a lot to do with it – head rice yields specifically.  In general, your head rice yield (% whole kernels) is controlled by the plant and by the environment.  The plant can only do so much and then the weather starts to chip away at it.

Essentially, as a rice kernel reaches lower moisture for harvest, every time a rain or heavy dew re-wets the kernel and then it dries back out during the day, there is the potential for a fissure, or crack, to form.  Each of these cracks provides a place for the grain to break apart in the milling process.  So when we have heavy dews followed by hot days we get excessive wetting and drying cycles and more grain fissures.  Add in that these temperatures, humidity, and dew points have slowed the overall moisture drop in fields delaying harvest, and you get the drier grains on the panicle undergoing prolonged wetting and drying cycles.

Part of this lack of drying down has caused more immature (green) kernels on the panicle.  These are higher moisture and part of what is delaying field harvest.  Immature kernels are also weaker and more prone to breaking.

There is not a great deal we can do about this but to hope for better drying weather or to just have temperatures and humidity finally fall on out so the crop will shut down and finish out.  Some management practices such as draining too early can have a negative effect as well, stressing the completion of kernel development and grain fill, but given the widespread problem across the state, environmental factors are the big problem. 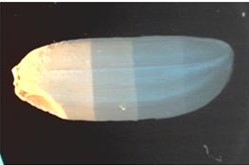 Table 1 provides a simplified comparison of potential returns for selected crops in 2021 versus 2022.  In the table, 2021 variable costs are directly from Crop Enterprise Budgets; for 2022, the only things changed from the 2021 budgets were fertilizer and fuel costs.  Clearly fertilizer and fuel costs have risen dramatically which should have a definite impact on crop selection decisions for 2022.  Read more on rising input costs in the Rice Market Update below. 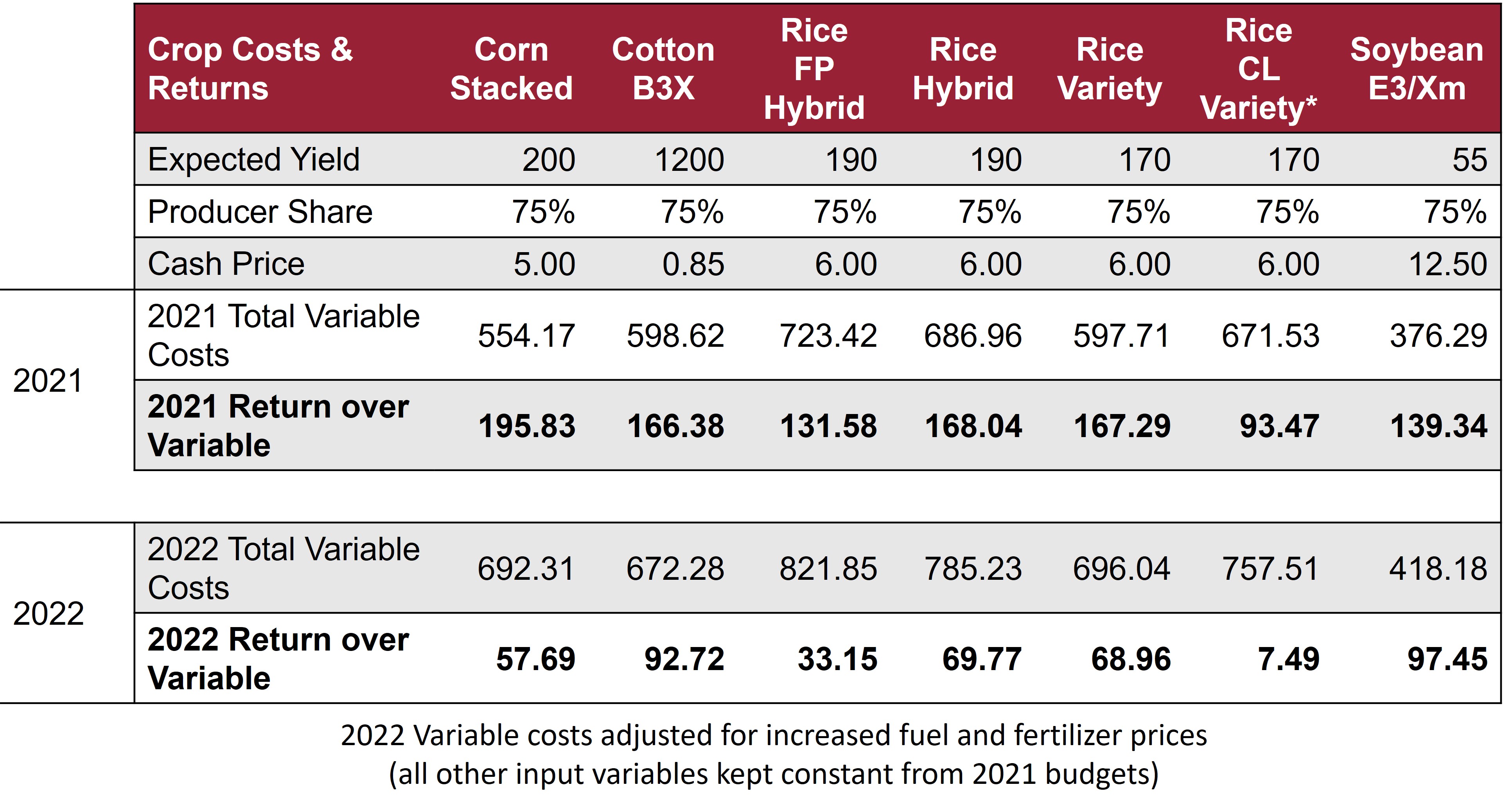 Rice futures pushed beyond key resistance this week.  In trading Tuesday, the November contract managed to close above $13.80 for the first time since August 16th.  Nearby chart resistance is at the August high of $13.92.  A sizeable cut to production in the September 10th USDA outlook has helped push rice prices about 25 cents per bushel higher.

Fresh fundamental news has been sparse this week.  However, harvest activity is picking up in the Midsouth region and providing more yield information.  Market momentum has turned higher this month and the continued improvement in Gulf exports should be price supportive.  On Thursday, cash basis for delivery to mills was 18 under November futures with bids at $6.04/bu.  Basis at driers around eastern Arkansas was 25 to 32 cents under futures with bids in the $5.91 to $5.98 range.

The U.S. Gulf continues to recover from Hurricane Ida with more grain export facilities expected to resume operations next week.  U.S. export sales of all grains continue to reflect the logistics complications at the U.S. Gulf, with sales and shipments below year-ago levels.  Long-grain rough rice sales for the week ending September 16th dipped to a marketing year low of only 200 tons.  The only rough rice sale last week was 200 tons to Guatemala.

Long-grain milled sales and shipments were also down from the previous week’s totals.  There were no sales reported to Haiti or Iraq for the week.  Total sales of 4,916 mt went mostly to Canada, Costa Rica, and Saudi Arabia.

Over the first six weeks of the 2021/22 marketing year, rough rice sales have totaled 349,066 mt vs 320,603 mt sold during the same period last year.  With stronger sales year to date to Mexico, Guatemala, and Costa Rica, rough rice sales are currently 9% ahead of last year.  Carried largely by the 120,000 mt sold to Iraq, total long-grain export sales (rough, brown and milled combined) are running 39% ahead of last year.

In Monday’s Crop Progress, U.S. rice harvest was 51% complete as of September 19th; slightly behind the 5-year average of 56 percent.  Arkansas was near the halfway mark.  The Deep South is wrapping up, with Louisiana and Texas at 91 and 92% harvested, respectively.  Mississippi was 64% harvested; 2 percent ahead of their average pace.  Missouri was at 26% harvested.  Fortunately, tropical storm activity has remained well out in the mid-Atlantic this week.  The near-term forecast for the Midsouth is clear and warmer, allowing steady harvest progress.

We are already getting calls this month for the 2022 budgets.  With the sharp increases in fertilizer and fuel this year, growers have been thinking about what they will plant next year.  Will higher input costs impact rice acreage in 2022?  Will growers turn more heavily to soybeans; a crop that requires less fertilizer and lower input costs overall?  Commodity and input price direction over the coming months will help answer those questions.  As mentioned last week, we have the 2022 wheat budgets available and should have the spring planted crop budgets available in early October.

Fertilizer prices continue to work higher.  This week an October urea barge traded at $600/ton fob New Orleans—the highest since May 2012.  The slow return to normal the U.S. Gulf is still causing problems in both production and movement of fertilizers and crop chemicals.  Bayer's glyphosate manufacturing plant in Louisiana has been shut down since August 28th.  We are told the Luling, Louisiana plant provides all the active ingredient for Bayer's Roundup produced in the United States.  In addition, imports of glyphosate shipped into the Port of New Orleans are down 71% from a year ago.

Below is partial listing of some inputs from a survey that USDA AMS releases every two weeks.  These are average retail prices from ag input dealers in Illinois.  Although retail fertilizer prices in Arkansas may differ slightly, the key takeaway is the price trend over the past year.  Urea is 81% higher, DAP 74% higher, Potash has doubled and farm diesel is up 70% compared to last year.

We hear from industry sources that price increases for urea, phosphates, and potash are not showing any signs of a top.  The fertilizer market continues to be too volatile to predict with a mix of logistical and political issues affecting prices.  The spike in natural gas prices is another factor driving up nitrogen fertilizer costs.  No doubt it will be challenging to lock-in inputs with local suppliers, but get the process started as soon as possible.