“I wanna rock and roll all night, and party every day.”

It’s amazing what can happen when the weather turns in our favor for just a little while.  Harvest progress should be expected to exceed 40% in Monday’s report given the continued favorable harvest weather this week.

Weather next week holds some rain chances but where and how much may fall are still subject to debate.  Those with late rice and beans still needing water may welcome a rain, but most are hoping for continued dry weather to keep the combines rolling.  A grower once told me “it’s just as well we can’t control the weather because we couldn’t all agree on it anyway.”

Yield reports are still overwhelmingly positive with some odd low fields thrown in as always.  Milling yields are still variable but with some possible signs of improvement.  It’s still too early to tell for sure which way the milling trend will bear out though.  Traditionally, lower milling yields to start the year see a trend for higher milling as we progress later.  We’ll see. 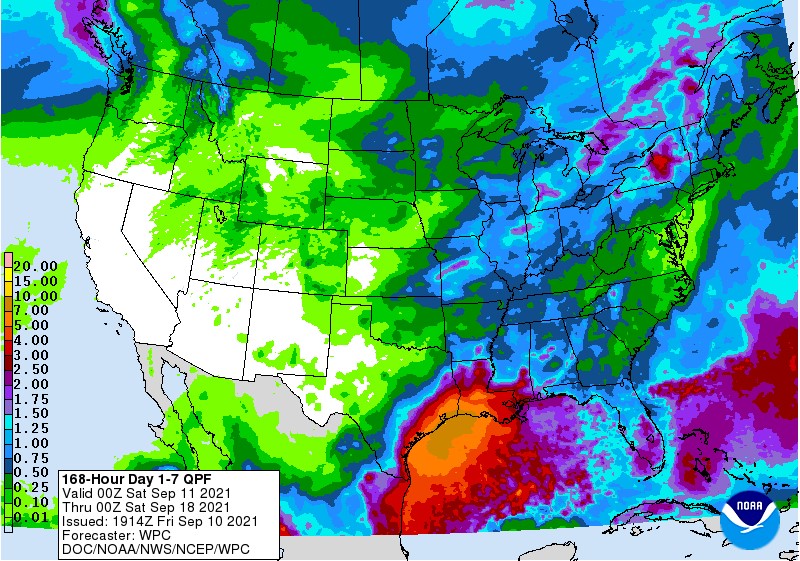 Each year there are questions about estimating rice yield lost out of the combine.  Table 2 provides the straightforward answer, but it’s not that simple.  The combine doesn’t spread residue as wide as the header in most cases (depending on how you set it), so simply counting the grains in a square foot behind the machine may overestimate or underestimate loss.

To be most accurate, you need to count the number of kernels in a strip the width of the header (Table 3).  For instance, with a 30 ft header, you would need to count the kernels on the ground in a strip 30 ft wide and 4 inches long (which amounts to 10 square feet).  Divide the kernels counted in that strip by 10 to get your number per square foot.

A simpler, and faster, approach is to think of the header width in sections.  For a 30-ft header, think of it as having three 10-ft sections.  Take a single square foot count in the center of each of these 10-ft sections, total the numbers and divide by three.  This will give you the number per square foot and capture areas to the side and directly behind the combine, while taking a third of the time as the traditional method.  Remember that when using this quicker method, you must be sampling in the residue swath – some set their combines to spread residue narrower or wider for various reasons.

Remember to count kernels on the ground in an area not yet harvested so that you account for shattered grain that isn’t being lost from the harvesting process.  Subtract any grain already on the ground from your harvest loss estimates.

The old crop (20/21) season-average farm price for long-grain was unchanged this month at $12.60/cwt. or $5.67 per bushel.  This would equate to a PLC payment for the 2020 crop of 63 cents per bushel (before sequestration).  The table below includes the projected 2020 payment rates per bushel for long-grain and southern medium grain.  Final 2020 marketing year average prices are expected to be announced October 29, 2021.

In Monday’s Crop Progress USDA estimated that 28% of the U.S. rice crop had been harvested; three (3) percentage points ahead of last year and 3 points behind the 5-year average.  Arkansas and Mississippi were both at 18% harvested; up from 6% the prior week. Missouri was in-line with its average pace at 6% harvested. Louisiana and Texas were 80 and 84% complete respectively.

Dry and warm conditions this week have allowed for significant headway in the Midsouth harvest.  Based on historical data, Arkansas’ should be 40 percent harvested by September 12th.

Earlier this week the U.S. Coast Guard opened the Lower Mississippi to barge traffic, with some restrictions on the number of barges that can be towed.

Some grain export operations have resumed this week.  Louis Dreyfus Co. began loading soybeans last weekend; another ship was being loaded with corn yesterday.  ADM restarted this week using rigs that can transfer grain from barges onto bulk ships.  ADM expects elevators in Ama and Reserve to restart by the end of the month, and repairs to an elevator in Destrehan to take "a few weeks longer" according to a release this week.

At least three other terminals are still without power, including the CHS Inc facility in Myrtle Grove and Cargill’s terminal in Reserve.  Bunge's facility in Destrehan is also shut down.

CF Industries announced on Thursday (Sept. 9) that it has begun restarting its ammonia plants at Donaldsonville, La.  Start-up of other units including urea and UAN will follow.  CF had halted production just before Hurricane Ida hit land, however, the storm disrupted power to the plant.  Gulf urea barge values hit a 9-year high last week.