“We’re having a heat wave, a tropical heat wave…”

Everybody pleading with the forecast for rain these days:

Out of the Frying Pan and Into the Fire

I saw a graphic today that showed the past month has been the driest of the past 130 years.  So, I don’t think we’re overstating just how dry it is.

The long-term forecast alluded to last week appears to be happening.  I very much want something positive to report.  But, if you’re tired of my doom and gloom, skip the rest of this section and jump below to other sections!

The next 10 days look like the hottest of the year so far, with a string of 100-degree days and nighttime lows staying at or above 75 degrees.  I do not want to have rice heading next week, but we’re making our way into more and more fields hitting that point.

Once we begin to top 100 degrees during the day, I am concerned with it affecting pollination.  Most problematic though, are the nighttime lows.  When we have 5+ consecutive nights of 75 or greater, it can impact pollination during flowering as well as our quality during grain fill.  Depending on your exact location and weather source, the next 10 nights are not expected to fall below 75.  Some nights may not fall below 80.  Yeesh.

Keeping cool water moving through the field could help, but only minimally.  Cold well water isn’t going to really change the microclimate much above the water line to help the rice heads.  But, it could help to reduce the overall stress on the plant from the high temperatures.  I know we’re all doing all we can to irrigate all we can, so there’s little likelihood of keeping water running somewhere when we could move that water source to another field that needs it, but it is something to consider if you had the capacity to do it. 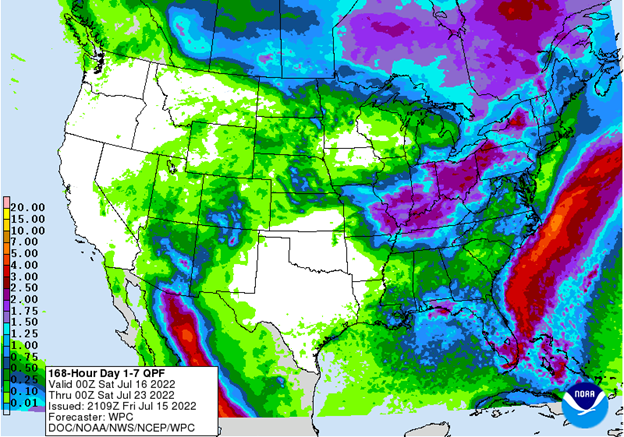 The biological herbicide LockDown will be available beginning the second week of July for those concerned about Northern jointvetch management.  We’re including this notification because supply will be limited and we can direct you to the appropriate contact person if needed.

Revenge a Dish Best Not Served

Questions abound regarding late clean-up herbicide applications.  “What should I spray to clean up barnyardgrass or sedges?”  In most instances these weeds are even heading at this point.  All we’re talking about is revenge now.  You may or may not gain any real control, and any yield impacts have likely already occurred.  Additionally, we may now expose these weeds to what will be a sub-lethal dose that could make these weeds more difficult to control in future seasons.  Applying most herbicides after rice goes reproductive could lead to rice injury including yield loss or malformed kernels.  In most cases, keep it in the jug and farm on.

We have received several calls this week on fields starting to head and having over-threshold levels of rice stink bugs (RSB) in them.  To be honest we were expecting the numbers to be higher than what is being reported.  Based on what we saw in wheat a few months ago and what we have been seeing on native grasses for the past several weeks, we are probably lucky the numbers are as low as they are.  Most of the reports we have received have been 10-15 RSB per 10 sweeps with the occasional 25-30 per 10 sweeps.  Most of this is probably due to the amount of barnyardgrass heading right now.  RSB seems to prefer it over rice.  Once it dries down though, rice will be the only game in town.  The way things are shaping up now, hopefully by the time the barnyardgrass does dry down a large percentage of our rice will be headed and will dilute the RSB populations to manageable numbers.

For the past couple of years, we have conducted assays on RSB to test for resistance to lambda-cyhalothrin (Warrior II, Lambda-Cy, etc.).  Our assays so far this year have shown between 65% and 75% control with a 1X rate of lambda, which is down from last year (90-100%).  Earlier this week we sampled some large block studies comparing Warrior II and Tenchu.  At 3 days after application the Warrior II plots averaged a little over 60% control and Tenchu was greater than 90%.  No nymphs were present at the time of application or when we sampled this week, so its hard to say if it’s just poor control with the Warrior II or if there was some reinfestation.  There is a very short residual with lambda.  Odds are it was both.

So, what does that mean for management of RSB this year?  Lambda still has a fit in many cases.  Keep in mind though, you cannot expect more than 60% control and, in many cases, late in the season during 2021 it was much lower.  If you do spray lambda our suggestion is to scout those fields within 3-4 days after application to determine the level of control you got.  If nymphs are present when you spray and also 3-4 days after application, then that is a sign of poor control.  With that being said, if it is all adults that could mean you got reinfested.

What are our other options?  Right now, the only non-pyrethroid options available are Malathion and Tenchu.  Carbaryl is also labeled, however many foreign ports test for it so we do not recommend spraying it.  As far as Malathion goes, it has looked good in our plots over the past several years, however we received multiple reports last year of folks not happy with it.  It has a shorter residual than lambda but seems to have more consistent knockdown than lambda.  In our plots it has taken 7-10 days to see nymphs start showing up behind a Malathion application.  Tenchu is another option, however it will be difficult to find.  In the past we haven’t seen a big difference between Tenchu and lambda besides price.  The past two years however, it has looked much better than lambda.  Similar to Malathion it usually takes 7-10 days to see nymphs behind Tenchu applications, and in some cases, we have gotten much longer control.

Bottom line with either of these products is we can’t afford to spray them twice.  The cost of Malathion is around $10 per acre for 32 oz and Tenchu is $12 for 8 oz.  If we are going to spend that kind of money on RSB our suggestion is to not spray until we are mainly soft dough.  That would put us on the tail end of the second week of heading into the third week of heading.  With that being said, if you are running 20+ RSB per 10 sweeps during flowering and milk you may want to consider an application.  We have done a lot of work looking at spray timing when we reevaluated our threshold, and we rarely see yield losses from RSB, but peck is extremely consistent.  If you can ride those populations through the flowering and milk stage and make one application of a product like Tenchu at soft dough, most of the time that will get us to the finish line.

Let us know if you have any questions or need anything.  We will update everyone weekly with what our assays and field studies are showing, and if anything new is available for RSB.  Also please contact us if you see a failure with lambda so we can make a collection to conduct resistance assays. 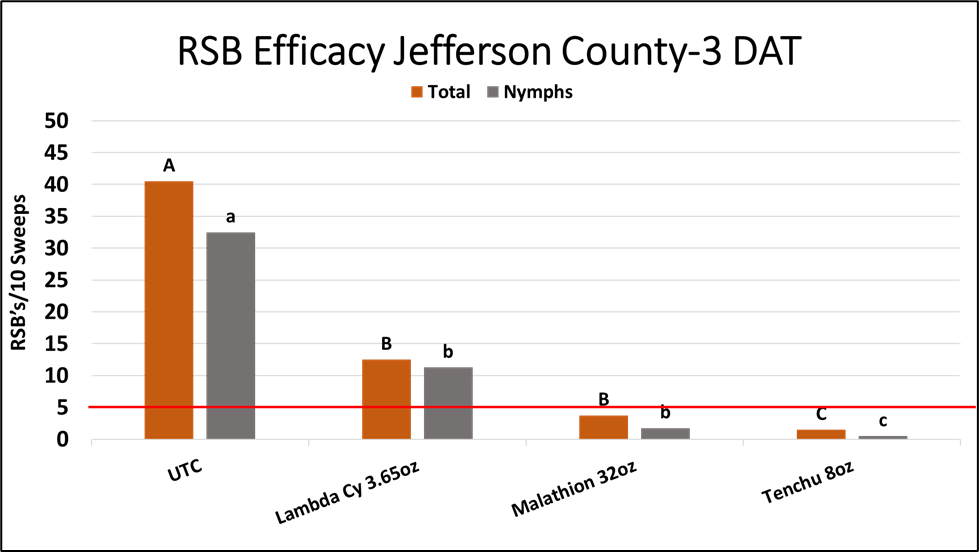 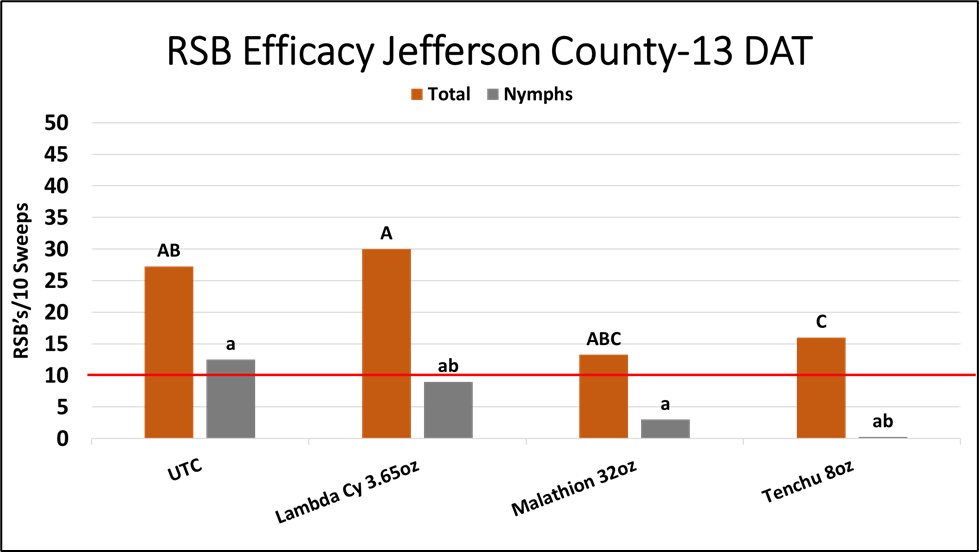 Sheath blight:  Just two weeks from artificial inoculation, sheath blight in our experimental plots has moved up close to 50% of the canopy height in CL 163 (Fig. 4).  This is indicative that the weather is warm and humid enough to favor the disease to progress.  Continue scouting for timely action.  Morning dew on leaves makes the micro-environment favorable to sheath blight and blast.  Fig. 5 is a picture taken in our experimental field taken at 10:30 a.m yesterday.

Blast:  In 2022, we received the first report of leaf blast on Titan from Arkansas County.  Neck and panicle blast, if severe, can cause near 100 percent grain yield loss.  If leaf blast is detected early in the season on a susceptible variety, neck blast is often predicted and at least a one-time protective fungicide is justified.  However, the absence of or inability to detect leaf blast on a susceptible variety in a field with a history of blast does not guarantee that neck and/or panicle blast won’t show up.

Note that the pathogen spores that can cause blast can be carried by wind and makes blast unpredictable.

Protective Actions for fields with a history planted with blast susceptible rice: 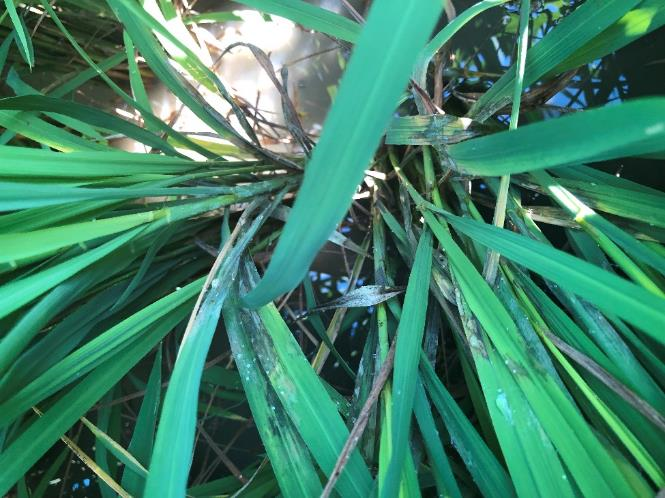 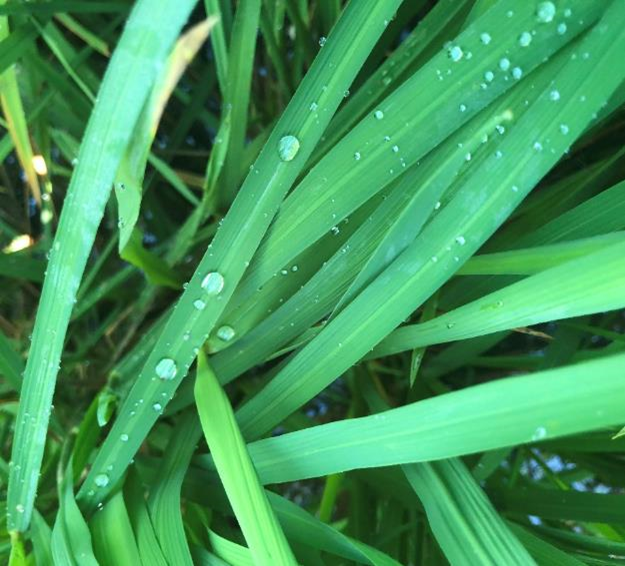 Total supply was increased as larger beginning stocks and imports more than offset lower production.  Beginning stocks are 2.5 million cwt. higher this month on increased old crop (21/22) imports.  Long-grain production for the 2022 crop was reduced 1.9 million cwt to 139 million on lower acreage.  The lower production estimate came as a result of 37,000 fewer harvested acres.  The NASS June Acreage survey provided the basis for planted and harvested acreage adjustments this month.  Long-grain imports were raised 3 million this month to a record 33.0 million cwt.

Domestic and residual use was raised 2 million to 115.0 million cwt.  Exports were reduced 1.0 million cwt to 60.0 million on lower production.  Long-grain exports would be the lowest since 1996.  Projected 2022/23 ending stocks increased 2.6 million to 21.9 million cwt; down 12 percent from last year.

Following Tuesday’s report, September rice futures closed 8 ½ cents lower at $16.45.  However, there was heavy, across-the-board selling in commodities and equities Tuesday.  No doubt though, the significant increases in old and new crop imports were bearish to long-grain.  The ’21 and ’22 marketing years are projected to see back-to-back record long-grain imports.

The September contract traded in a sideways range this week, finding support at $16.40 and resistance at $16.60.  Trading was noticeably higher Friday (7/15) as the weather forecasts for the upcoming week calls for a resumption of intense heat and dryness in the Delta.  New crop basis remains firm around eastern Arkansas.  Basis for August to October delivery at mills is 14 cents per bushel under futures.  Basis at driers for early fall delivery is in the range of 20 to 27 cents per bushel under futures.

The DD50 Rice Management Program is live and ready for fields to be enrolled for the 2022 season.  All log-in and producer information has been retained from the 2021 season, so if you used the program last year you can log in just as you did last year.  Log in and enroll fields on the DD50 website.