“Gonna buy me a ticket, to the end of the line, gonna feel the air, breathe the countryside, long as those wheels keep rolling, I’ll be satisfied, gonna ride, ride, ride.”

It’s finally getting hot and dry and feeling like summer.  Mosquitoes are showing up with a vengeance this week and that topic seems to come up in every phone call.  Fields that don’t still have floodwaters on them are extremely dry and we need to keep up with our flood and furrow-irrigated management.  The top ends of row rice fields are drying rapidly, so if you’re not using soil moisture sensors, try to stay on top of regular irrigations.

Questions have heavily turned toward fields hitting reproductive growth.  With that, the discussions center around timing midseason nitrogen and possibly potassium deficiencies emerging.  More on those topics are covered in this update.  As a lead in, we have plenty of time to make proper midseason N applications, and we have plenty of time to correct potassium deficiencies – don’t rush to decisions that could cost you more money with less benefit.

The coming week has some chance of rainfall in the forecast for just about every day.  Who knows how much anyone will get at any point, or at all, but it looks like a very unsettled week.  Some of the earliest planted fields in the state could see heading by next weekend if temperatures hold up to drive the crop there.

Table 1.  Percent of acres reaching ½” internode elongation (IE) by week (based on fields in DD50).

The current recommendation is to apply midseason N after beginning internode elongation AND 4 weeks after preflood N was incorporated by the flood.  You must meet both conditions before applying midseason N to maximize your benefit.

Fig. 2 shows the percent of optimum yield based on timing of midseason N after the flood was established and indicates that 4-5 weeks after preflood N is incorporated is the optimum time to apply midseason N.  Fig. 3 is another way of looking at the same data but based on days after BIE.  In Fig. 3, ½” IE corresponds with 7 days after BIE.

Again, the absolute earliest to ever apply midseason N is BIE, but only if it’s been 4 weeks since the flood was established to incorporate the preflood N. 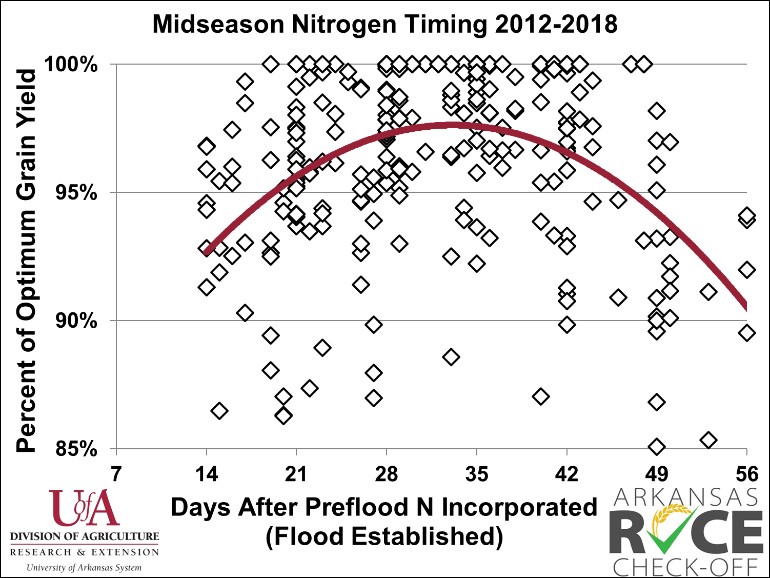 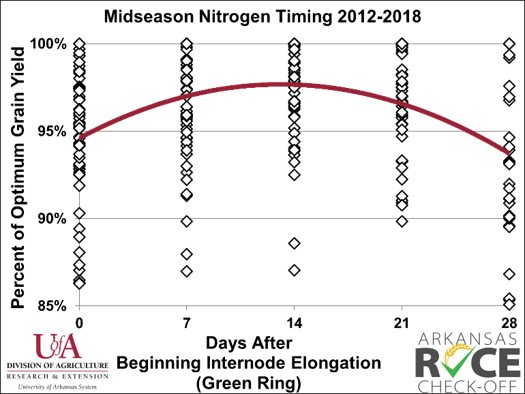 Potassium (K), also referred to as “potash” is a plant essential element that is often limiting in Arkansas soils.  Most potassium deficiencies will be observed on lighter textured sandy loam and silt loam soils as clay soils often contain potassium concentrations well above the threshold for optimal rice growth.  Most people fail to realize that K is needed in relatively equal or slightly greater amounts in the rice plant as nitrogen (N).  Potassium is critical for water regulation in the plant, aids in several metabolic functions, and is a key component in the plant's defense system against disease.  Oftentimes, some of the first indications of K deficiency are the early onset of “nibbler” diseases such as brown spot or narrow brown leaf spot (Cercospora).  These diseases are only able to break through the plant’s natural defense system when the plant is stressed - most often due to hidden hunger or moderate to severe K deficiency.

Tissue testing is another method of identifying or confirming K deficiency in rice.  To effectively use tissue testing to identify nutrient deficiencies the correct plant part must be sampled.  For rice that is near or past green ring, we suggest sampling the Y-leaf which is the leaf blade on the uppermost collared leaf.  Fifteen to twenty Y-leaves are required to have enough sample to complete the analysis and should be collected from the entire field or area of interest.  Recent research on using Y-leaf tissue K concentration indicates that >1.6% tissue K is optimal from green ring through mid-boot.  Our goal should be to keep the Y-leaf tissue K concentrations above 1.6% during this timeframe.

Potassium deficiencies are rarely diagnosed preflood due to the low demand by the plant and relatively small amount of plant biomass before N fertilizer application and irrigation.  Once rice has been fertilized with N and enters the rapid vegetative growth stage the amount of biomass increases rapidly and if there is not sufficient K in the soil to meet this growing demand we can experience either hidden hunger or visible K deficiencies. More often than not, we start to observe visible K deficiency symptoms around ½ internode elongation (sometimes following midseason N application to pureline cultivars) which can progress as the plant continues to grow and K remains limited.  Although K deficiency symptoms can occur at any time during the growing season they tend to be more pronounced and easiest to identify ~4 weeks after flooding.

If a K deficiency is identified 100 lb potash per acre (60 units K2O per acre) is recommended at the first onset of symptoms and yield can be salvaged until the late-boot growth stage.  Timing of K application is critical with earlier identification of the deficiency and application of potassium to deficient rice leading to higher yield potentials.

Being proactive in the management of soil nutrients is always the best course of action.  However, it is always good to be on the lookout for potential K deficiencies near midseason as this is when they are most likely to occur and be “obvious”.  If you are concerned about K deficiency a tissue test may help identify potential hidden hunger.  Please remember that there is a wide window of opportunity for successful application of K from preplant to late-boot, but the earlier a potential K deficiency is identified the larger the return on investment. 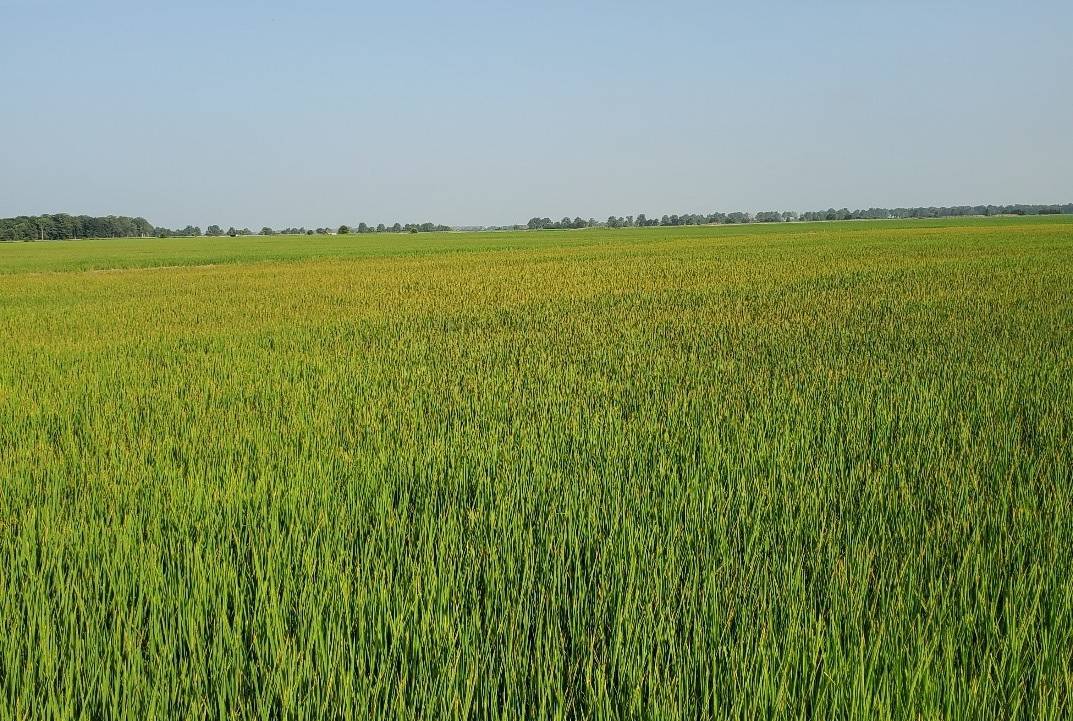 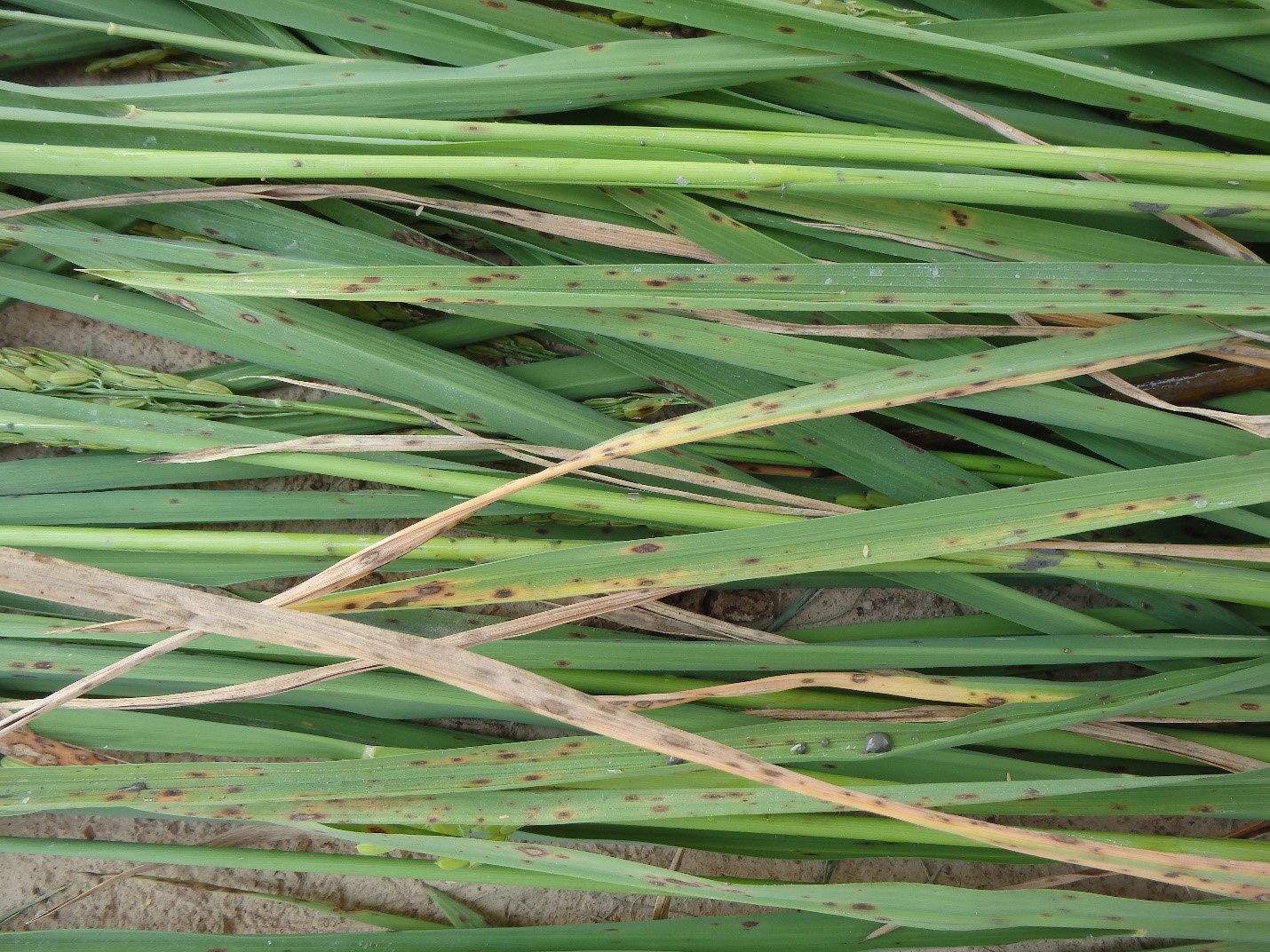 Over the past week we have gotten multiple calls on armyworms, specifically fall armyworm, showing up in crops ranging from soybean to pastures, and of course rice.  There doesn’t seem to be a pattern on which fields these armyworms are targeting.  Our calls are ranging from 2-3 leaf rice up to joint movement.  We have done a lot of work over the past 5 years to determine when applications need to be made for armyworms in rice.

The bottom line is rice can take a lot of defoliation before we get significant yield losses.  At the 2-3 leaf stage, even with 100% defoliation, where plants were cutoff flush with the soil, we do not see a yield decline across any planting date.  We have seen a similar trend at early tiller (Table 2).

Things change once we move into late tiller and green ring growth stages.  We can get significant yield losses and heading delays if large amounts of defoliation (Fig 6-8) occur at these growth stages (Table 3).  Keep in mind that the severity of the yield loss will be worse for later planted rice.  If you notice, the May planting date has a higher percentage of yield loss than April or June.  This is related to the amount of heat units this planting received shortly after the green ring defoliation occurred.  For the June plantings, it was milder at the green ring timing allowing the rice to recover more of its yield potential.

Based on this work we have set our thresholds for defoliation in rice at:  No treatment is warranted for rice between the seedling and 2-3 tiller growth stages unless armyworms are able to feed on the growing point.  For May and June plantings, armyworms should be treated when defoliation exceeds 40% at 5-6 tiller and 20% at green ring.  During heading, treat if head clipping is occurring and armyworms are present.

If applications are needed, Lambda-cyhalothrin (Warrior II, Lambda-Cy, Silencer, ect.) is the product of choice.  Keep in mind our counterparts in surrounding states have seen a few misses with lambda due to having some corn strain fall armyworms in the field, which is resistant to lambda.  We recommend spraying lambda first and scout withing 3-4 days after application.  If there is still a large population of armyworms in the field, then we can come back with Dimilin.

Rice can handle a lot of defoliation before yield loss or delays in maturity occur.  Let’s not spray when we don’t need to, and if we do have to let’s try to go as cheap as possible.  Let us know if you need anything or need help making decision on making applications. 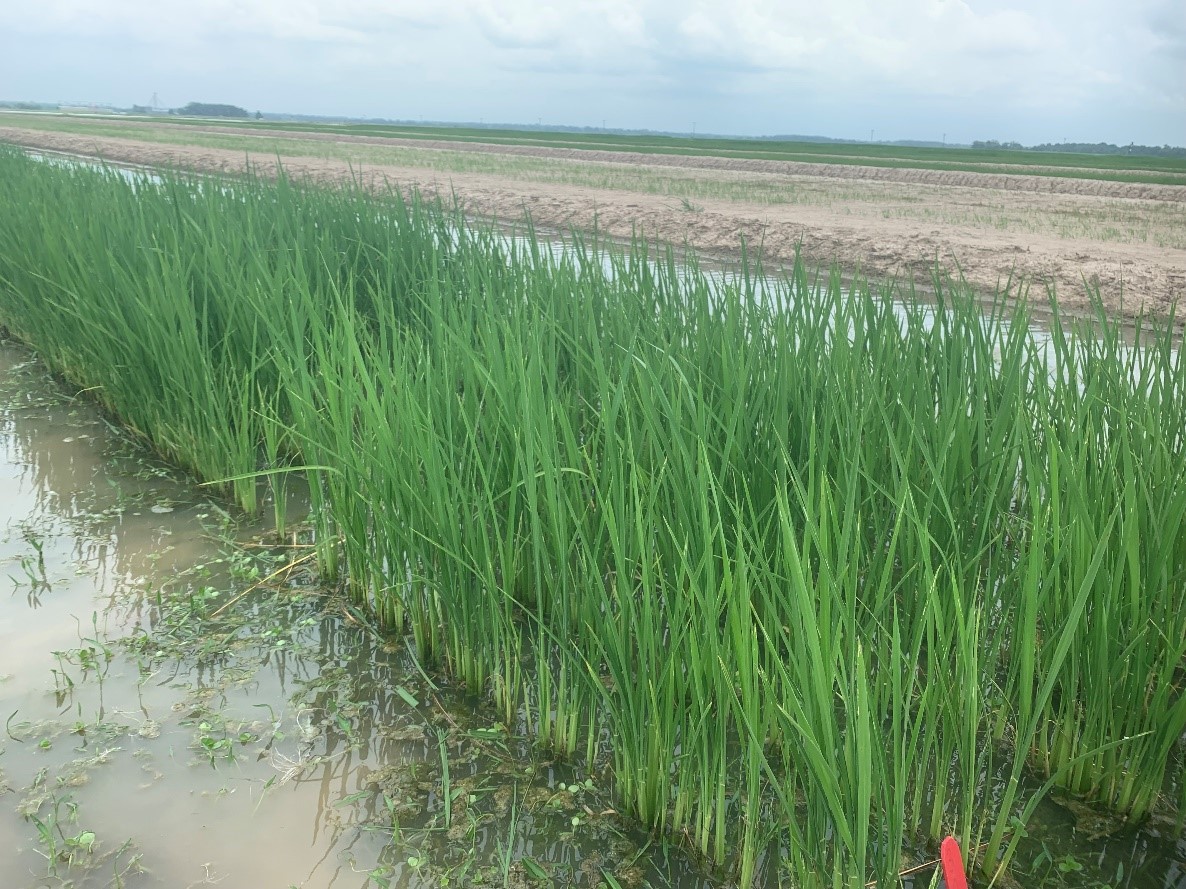 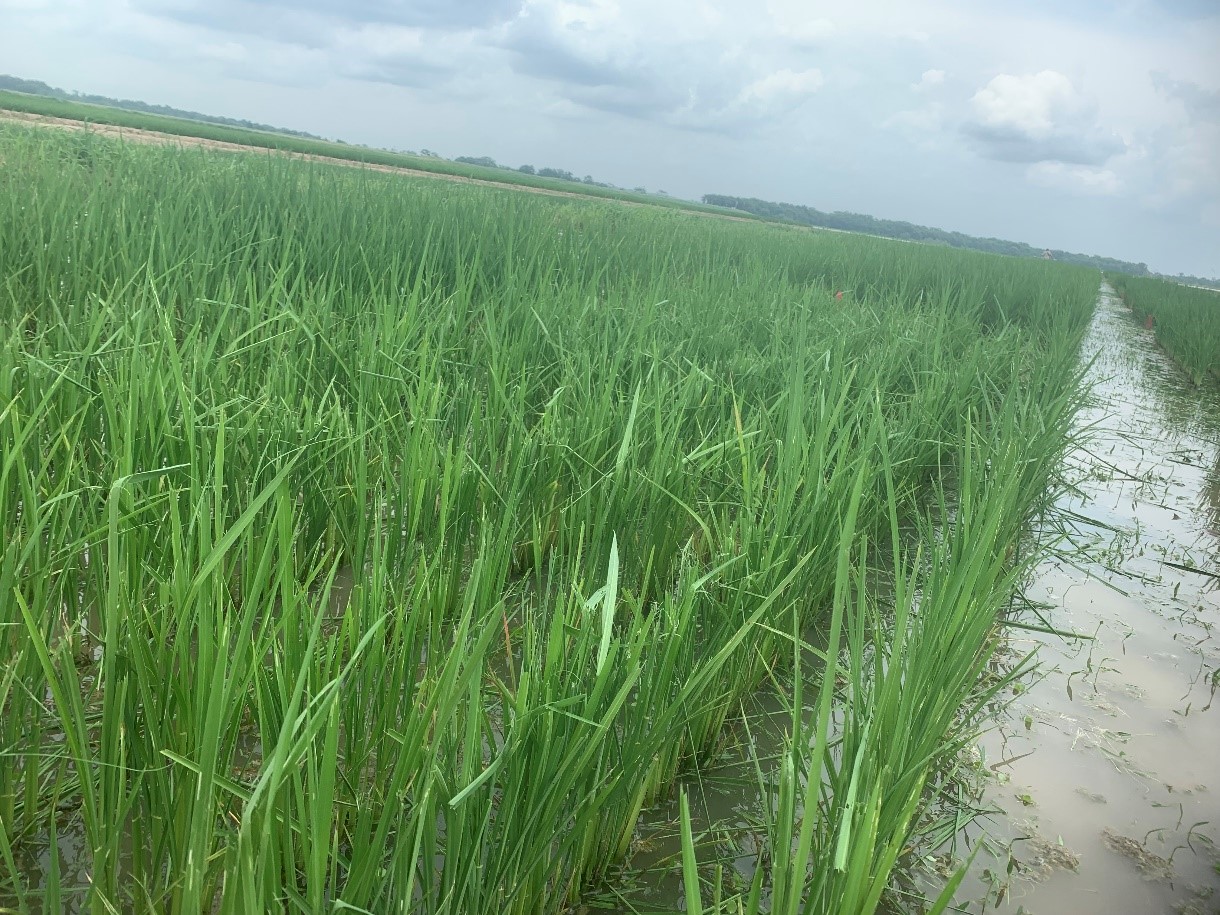 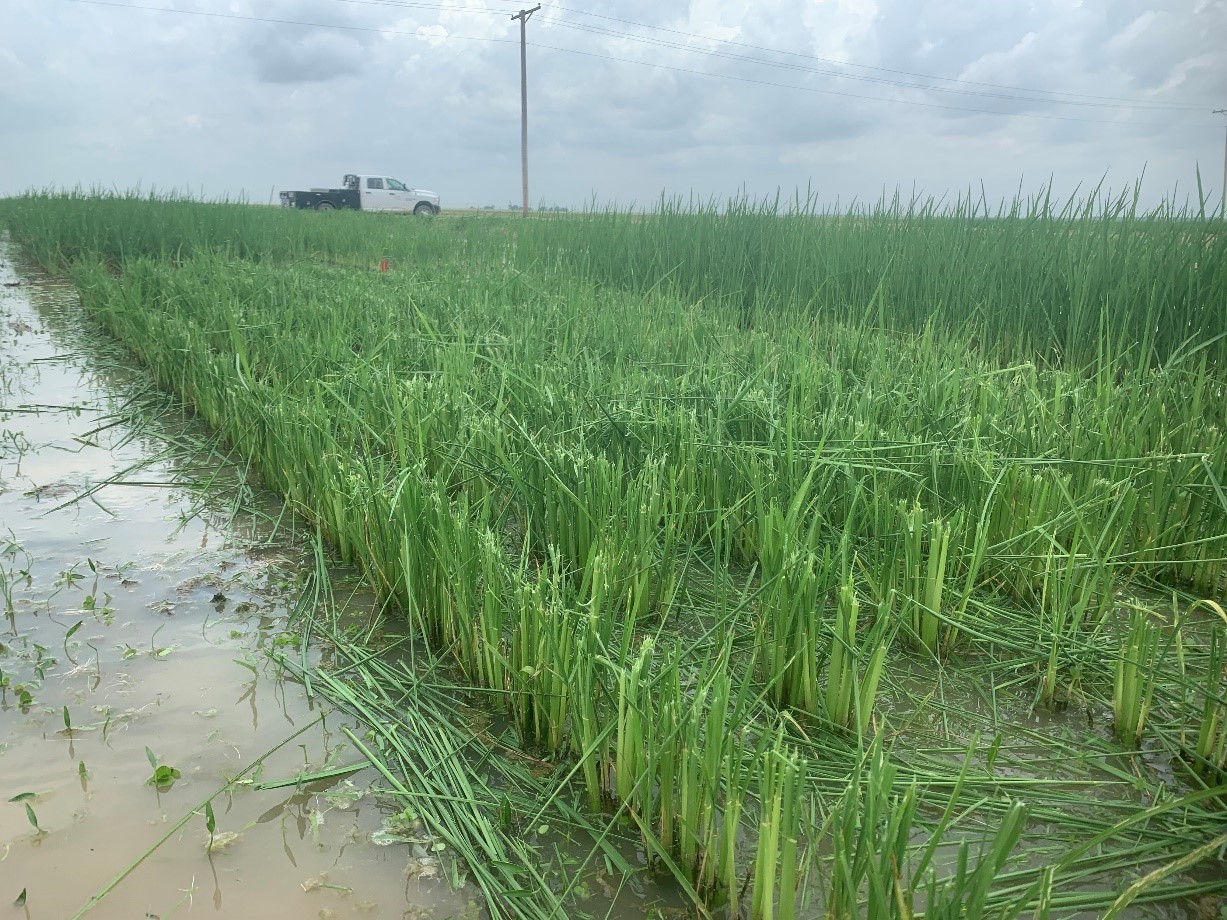 Leaf blast has started!  We received our first report of leaf blast on June 20 on Titan in 2021 from Randolph Co.  In 2020 the first report came from the same county on the same medium grain rice, Titan.  If you have not started scouting fields planted with susceptible rice for blast, please do so.  As observed for several years, blast in Arkansas often starts in the second or the third week of June.  When you start scouting, you need to know where in the field to look for the symptoms.  Often, levees, drier field edges, high ground within a field, and field edges near trees particularly east side trees.

Leaf blast in Arkansas starts mostly in the 2nd or 3rd week of June.  Frequent rain, gloomy/overcast skies are fit to the blast pathogen.  The blast fungus spores germinate when leaf wetness lasts from 9 to 14 hours.  Dew and fog in river valleys or low lying grounds often last long.  Tree shades particularly on east side of a field favor blast conditions.  Drought stress on levees, at field edges or higher grounds in shallow flooded fields serve as hot spots for spore production.  Sandier soils that do not hold flood consistently often are liable to blast.  Under any or combinations of these circumstances, a susceptible or moderately susceptible rice to blast may get sick.  Your field management particularly planting timing, seeding rates, and adequacy of nitrogen fertilization and other fertility factors play role in the severity level of the disease.  Knowledge on your field history and attempts done on variety selection to match a field helps successful blast management.

It is seed-, residue- and wind-borne.  It is versatile and easily adaptable because it develops different races.  It can infect rice throughout the season causing leaf blast at early stages, collar blast at the base of leaves, panicle blast as the panicle branches push out of the boot and neck blast or node blast.

Up to 100% grain yield loss depending on the parts affected.  Neck blast is the worst of all if no action is taken to rescue the crop and rescue should start early.

Scout for the disease starting late tillering if your variety has an S or MS reaction to blast (Refer to the table at 2021 Rice Management Guide page 24 to learn about your variety reaction level. 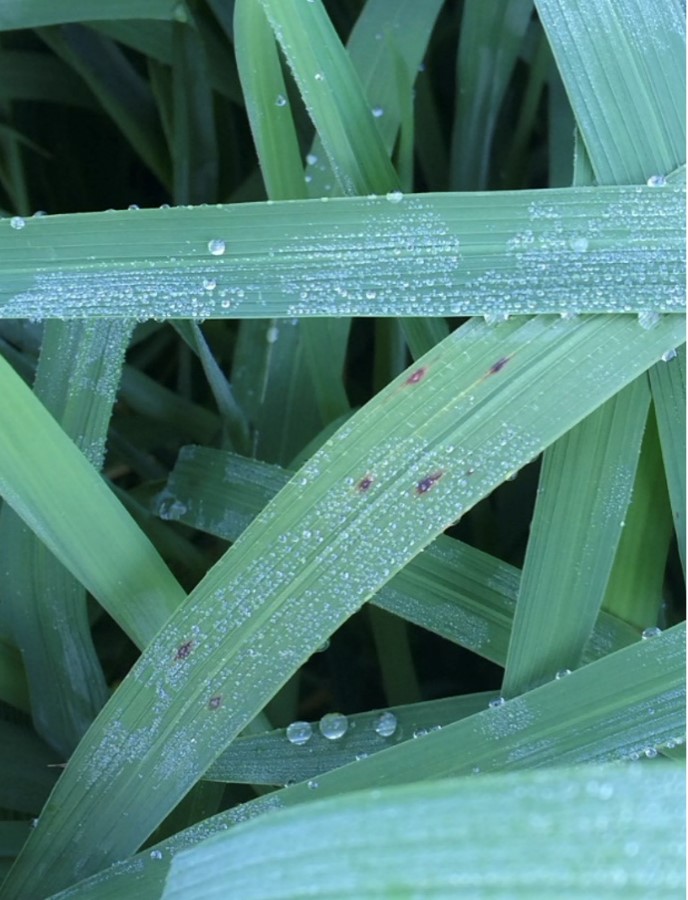 Fig. 10.  Early lesions blast which may be confused to brown spot 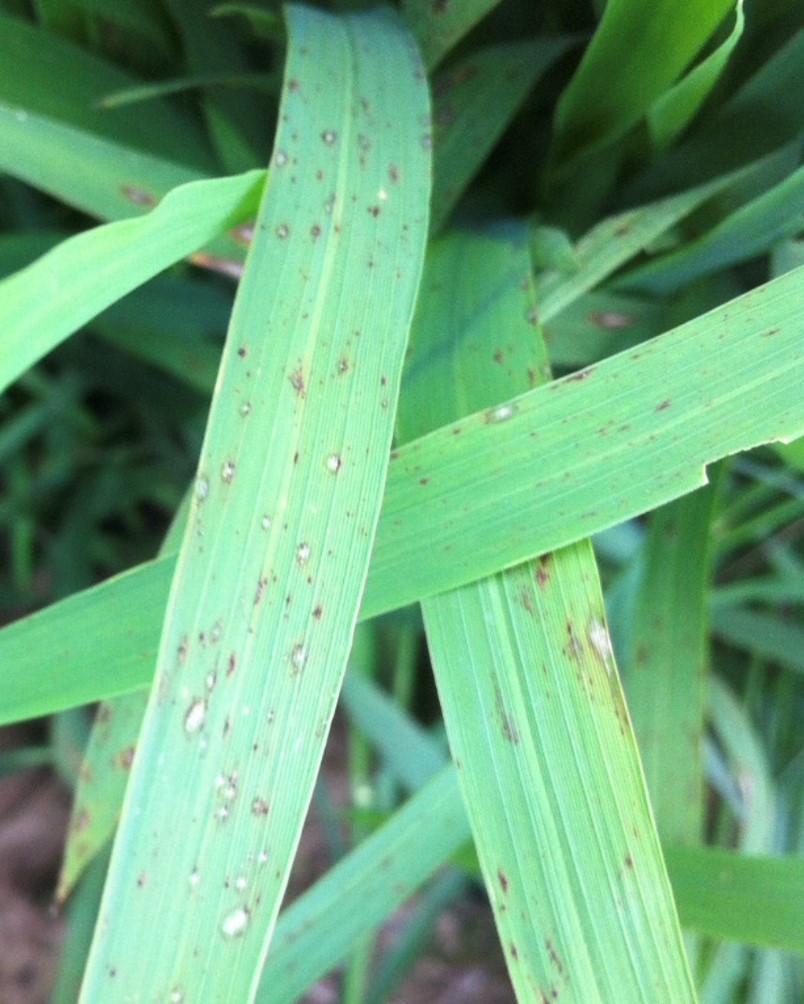 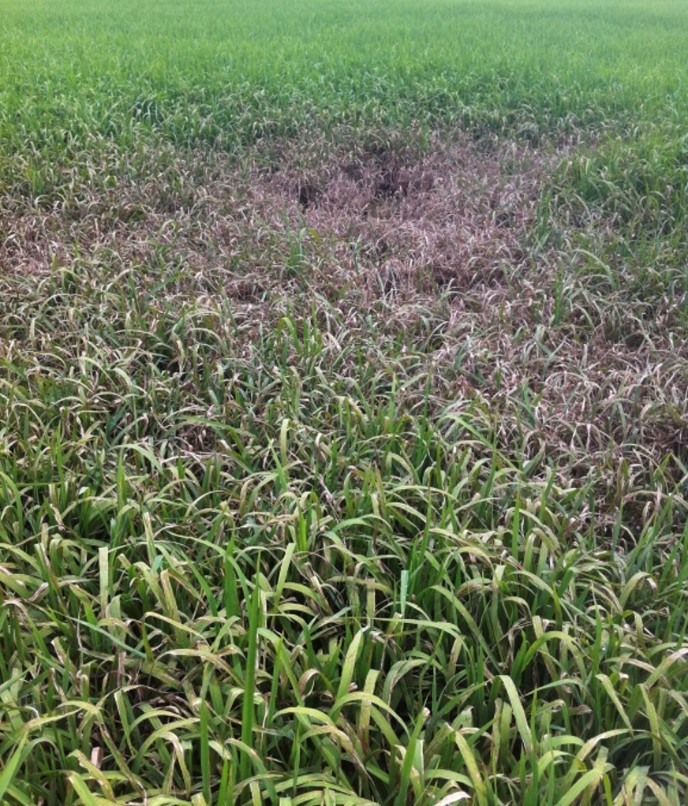 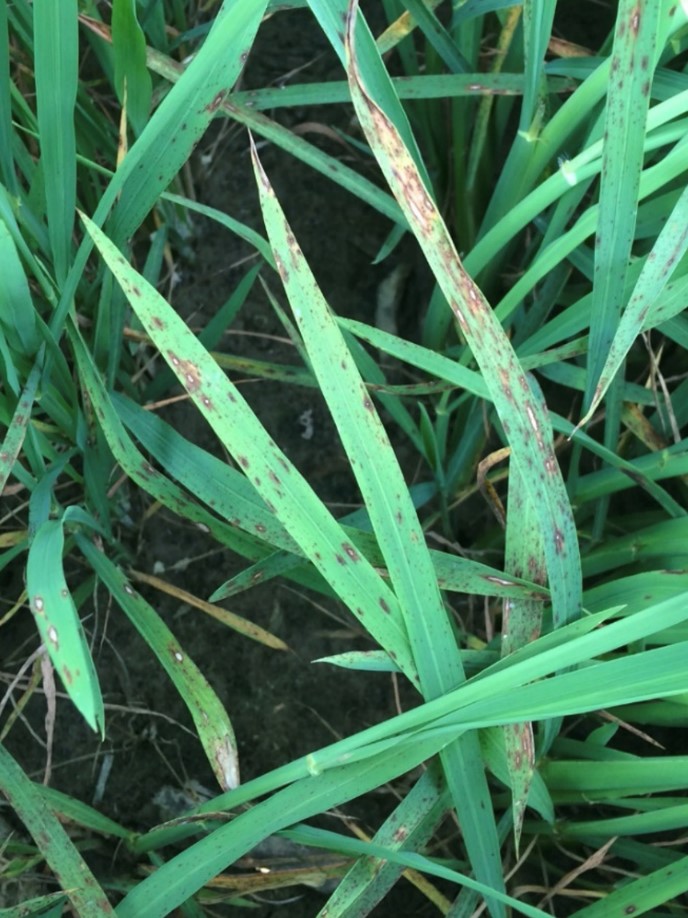 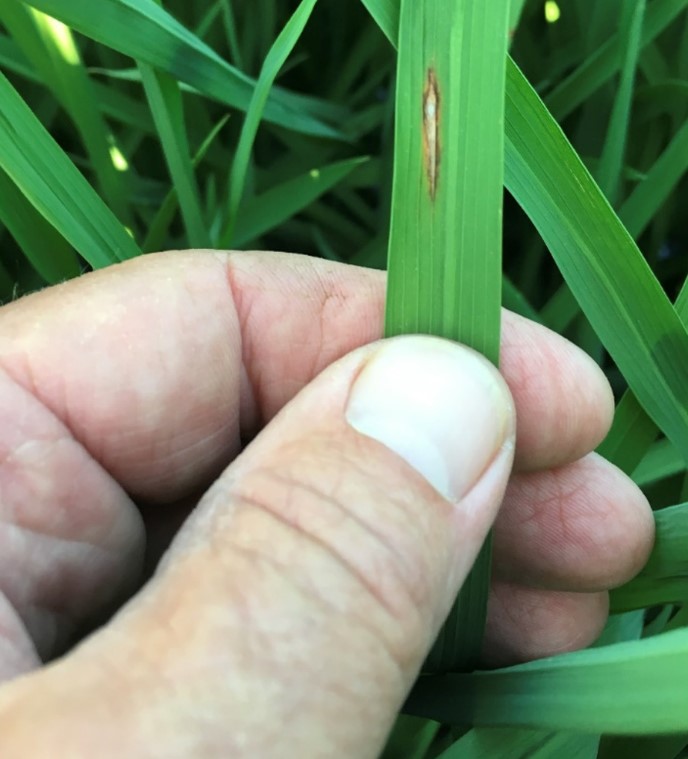 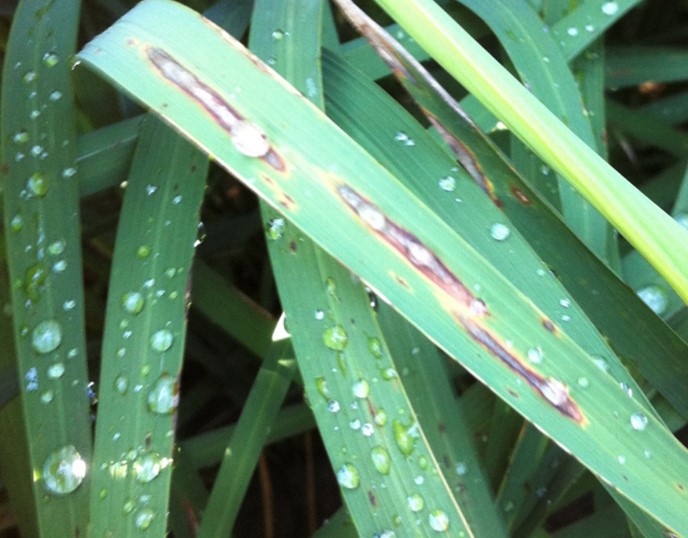