“Roll on down the road just let it roll.”

This week has been a mixed bag depending on where you were in the state.  Monday night and Tuesday morning much of the state received rains to stop progress, but certain areas didn’t really have to check up.  Additional statewide rains on Thursday (5/5) will put everyone a few days out from rolling again.  So, while we reached 40% planted as of 5/2, it looks as though we’re probably now around the 50% planted mark.  Even at that, we’re still tracking with our recent slowest years of progress such as 2013, 2019, and 2020.

The upcoming week easily has the best forecast we’ve seen all year.  At this point, it looks like at least a week of sunny days with temperatures in the 90s.  In fact, we may run into looking for a rain again before long with that much sun and heat coming our way.  If we do get 7-10 days of dry weather to run, we’ll likely knock out most of the remaining rice acres to be planted.

One concern that will be upcoming is that so much rice that has been planted has emerged or will be emerging now, and it will be more difficult to get remaining fields off to a clean start.  Meaning that fields remaining to be planted may still need burndown herbicide applications and may be in close proximity to emerged rice.  Be prepared to make difficult decisions for burndown where you may have to make the burndown application prior to planting and separate from your application of residual herbicides after planting.  Simply utilizing tillage prior to planting often does not give the desired result and flips large weeds under only to let them reestablish and come back to cause problems.

Kick the tires and light the fires – let’s get to business this week! 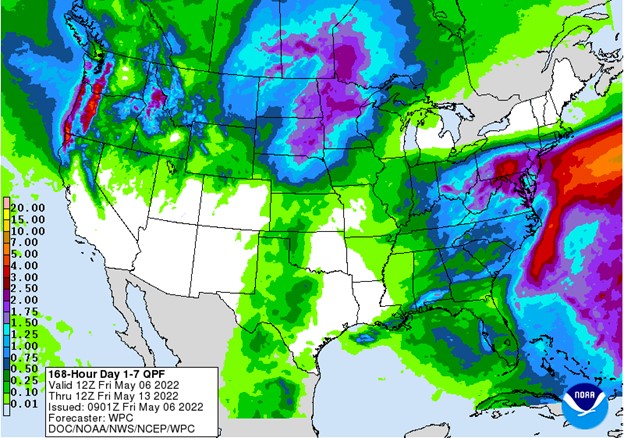 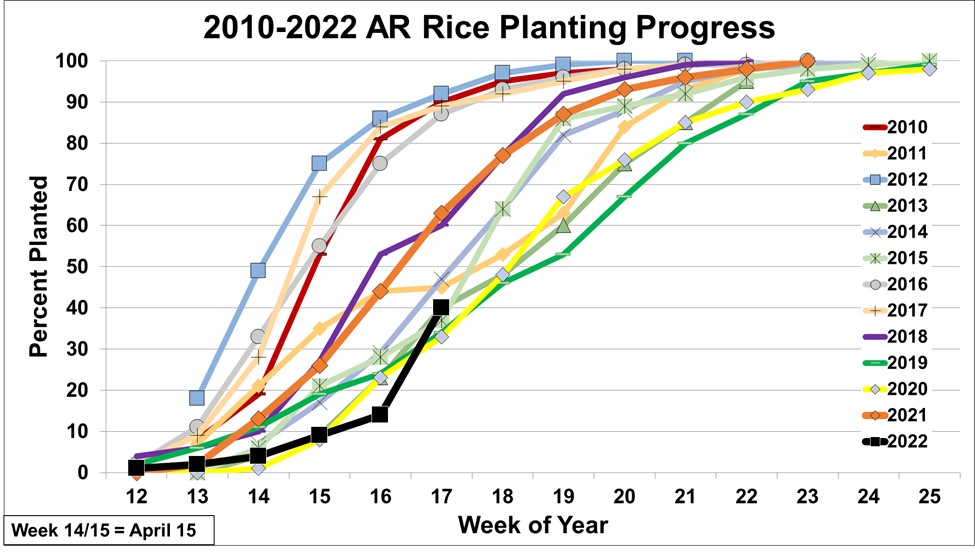 There was reported hail damage to seedling rice this week, and since we’ve had a number of hailstorms already this spring, it’s a good time to address the issue.  The good news is that for seedling rice, particularly 5-leaf (V5) or younger rice, it just looks ugly.  In past studies performing simulated hail damage and in more recent studies looking at defoliation in general, there isn’t a yield loss associated with even complete defoliation at these stages.  Within two weeks you’ll be amazed at the number of tillers those plants will have produced to recover from the injury.

The biggest concern is a delay in maturity associated with the time it takes for the plant to regrow.  Depending on conditions there may not be much delay at all but could be as much as a week delay in heading.  A fertilizer application of AMS or DAP may help encourage speeding up some growth, but not until the rice has recovered, and by that time you may be ready to take it to flood.  I’m not advocating for the fertilizer application – we’ve observed yields to be equal between plants with no damage and those with 100% defoliation at seedling stages, often with little difference in maturity.  I say keep the fertilizer application in your pocket and let the rice do its thing. 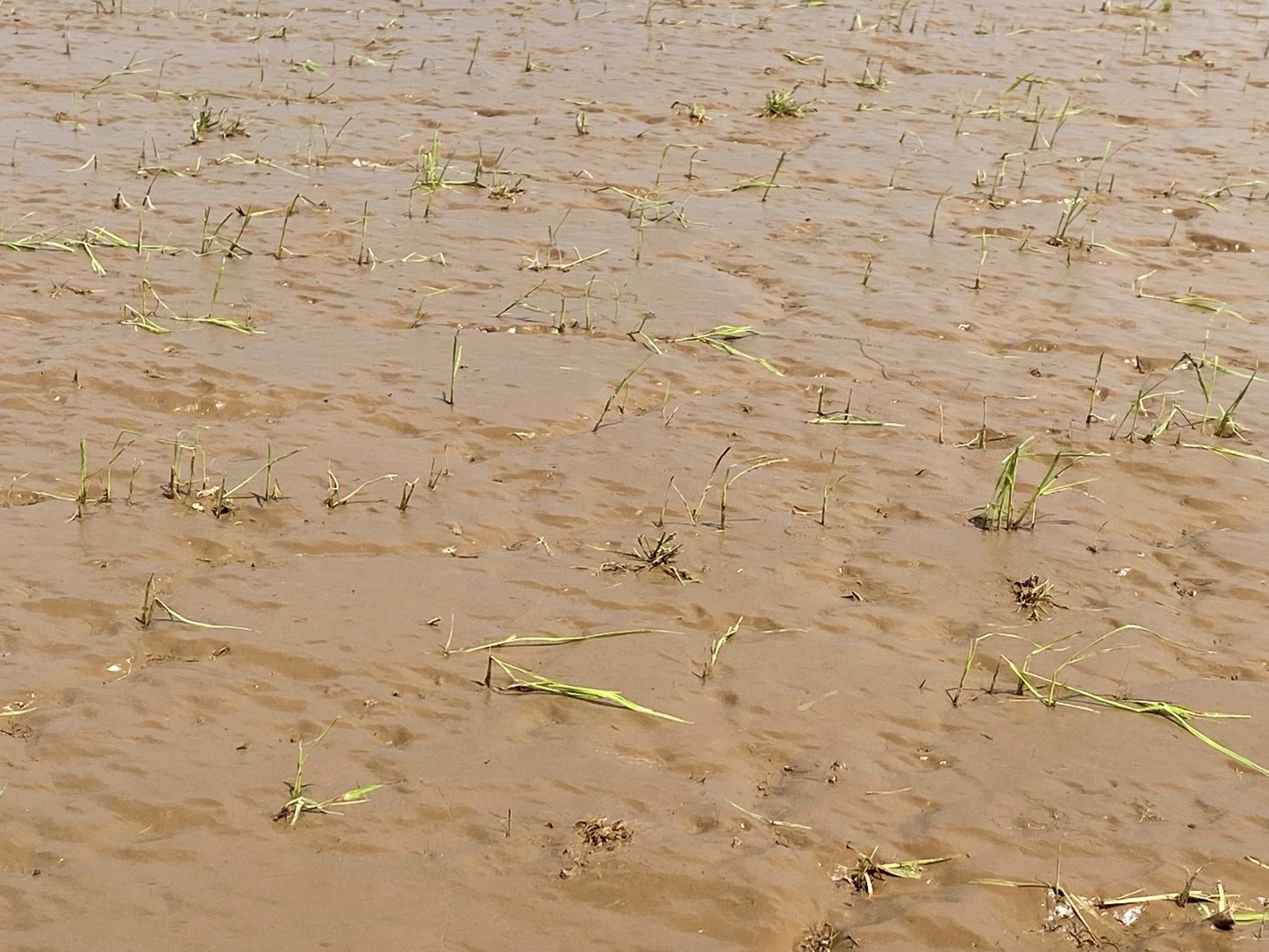 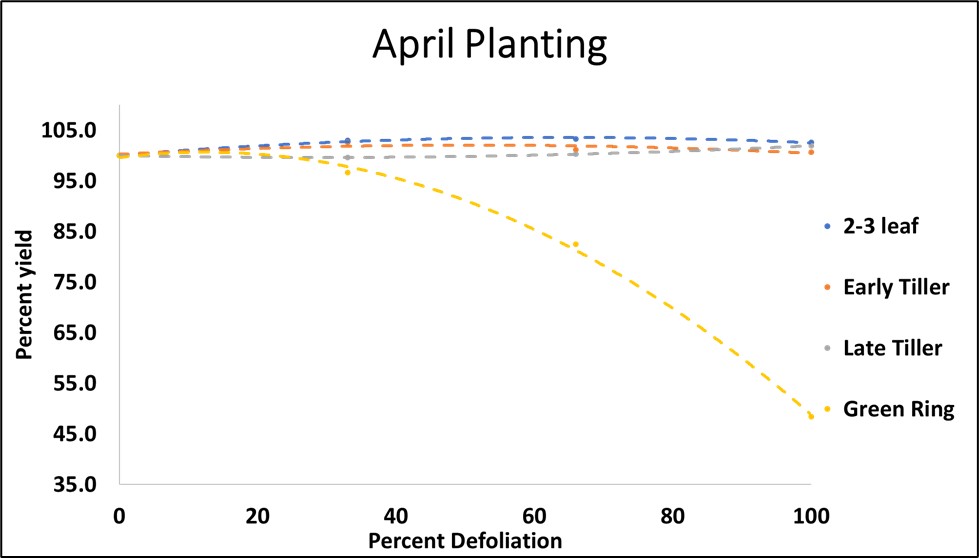 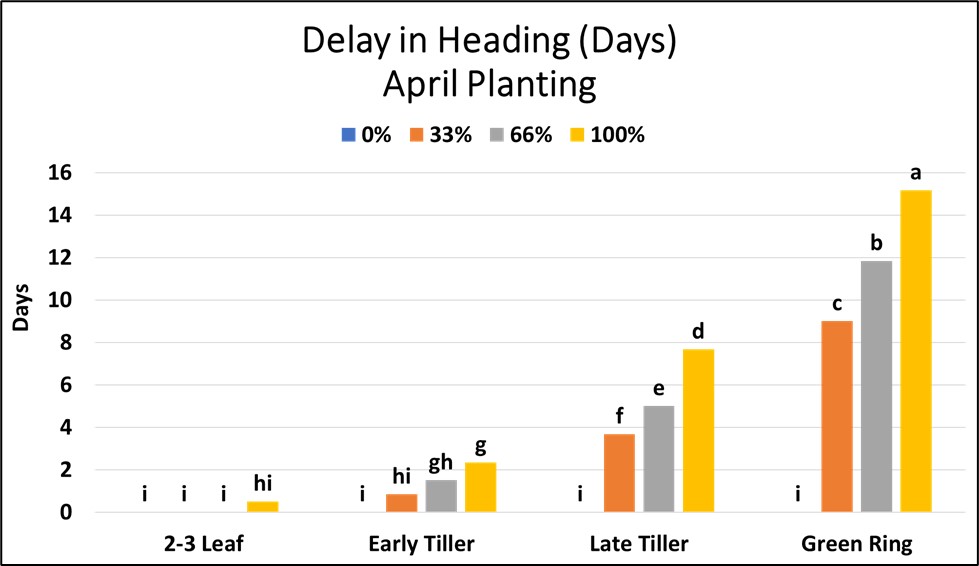 Slow planting progress isn’t what it once was.  In the last decade we’ve had a number of years with slower planting progress, compared with the handful in the 30 years prior (Figure 1).  Interestingly, the slow progress in recent years hasn’t resulted in the same yield reductions as those in the past.

This is all to say that later planting of rice still has its problems, but we’ve still been able to achieve excellent yields.  The next week will certainly be extremely important for trying to complete as much rice planting as possible.  Figure 2 shows the grain yield performance by planting date of fields enrolled in the Rice Research Verification Program since 2010.  It indicates what most of the small research data has told us, and that is we have until around the middle of May to still make excellent rice yields.

Having said that – every operation is different, make the best decision for your operation in terms of planting rice versus an alternative given your situation. 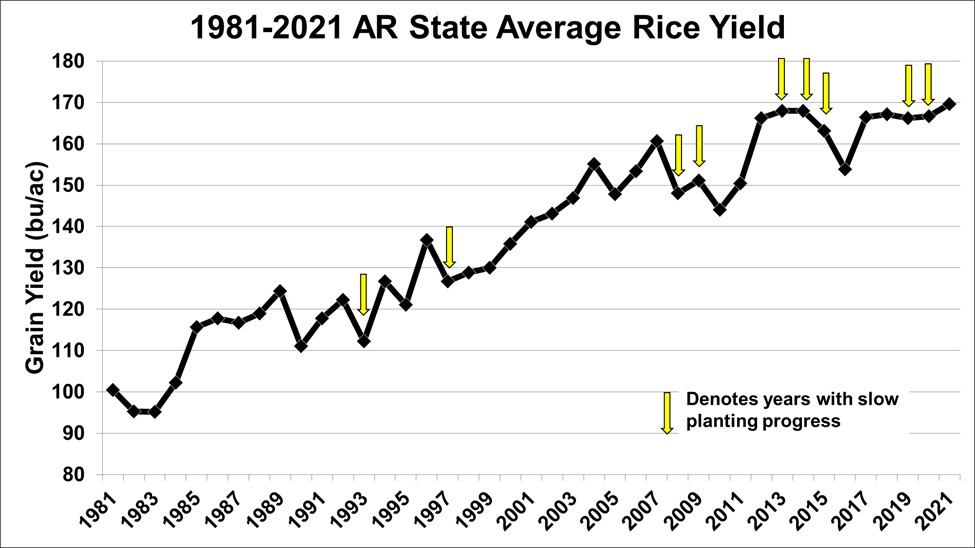 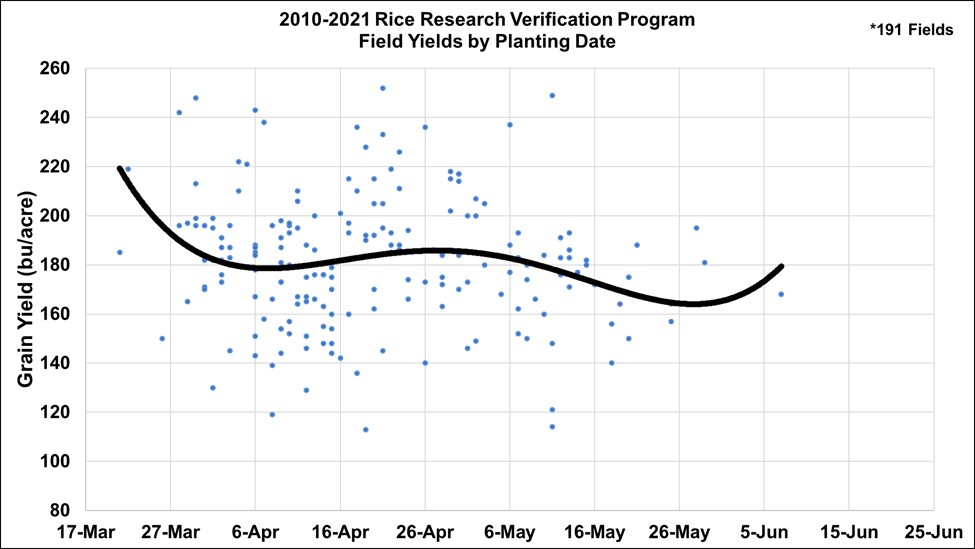 Back on 4/15 we originally showed the comparison below in Table 5.  Some things have changed a little since then so it’s time for an updated look.  The table uses current UA System Division of Agriculture operating cost estimates, a lower estimate where some producers captured lower fertilizer and fuel prices, and a producer share of 75%.  This is a starting point, knowing that every operation has different input costs and rent structures.

One thing that hasn’t changed is that this is simply a snapshot – compare using your own estimated operating costs, rent structure, and expected yields.

As mentioned, individual farm returns will be highly influence by the timing of key input purchases, particularly fuel and fertilizer, rental terms, and commodity marketing decision.  We encourage producers to evaluate comparative crop returns using their historical yields, 2022 input costs, and other factors unique to their operation.

Updated 2022 Cost of Production Estimates can be found on the University of Arkansas’ Cooperative Extension Service website at this link: 2022 Crop Production Budgets.  Budgets for the major row crops are available for download in Microsoft Excel format.

Some remarkable headway in Monday’s Crop Progress and a favorable weather outlook offered resistance to rice futures this week.  Traders may also be stepping aside ahead of next week’s May 12th WASDE.  Note the initial 2022 balance sheets will include planted acres from the March 31 planting intentions, which still point to a bullish price outlook.

Last Friday’s trading had taken the September contract well into “overbought” territory (RSI: 80).  Trading this week could be considered a technical correction.  The daily and weekly charts remain in an up-trending channel.  If the weather outlook holds, significant planting progress in the Midsouth will pressure the market next week.  The findings in next Thursday’s WASDE will have longer term influence over price direction. 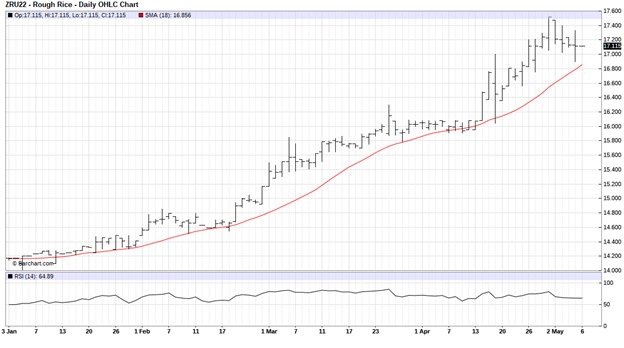 Monday’s USDA Crop Progress had U.S. rice acreage at 45 percent planted as of May 1, up from 26 percent the prior week.  Arkansas and Mississippi made significant headway in the later part of last week.  Both states covered 26 percent of expected acres in a narrow 3 – 3 ½ day window.  The outlook for the upcoming week is favorable and should allow Midsouth planting to catch up to (if not surpass) historical averages.

Russian fertilizer cargoes sailing to Brazil averaged 81,000 metric tons a week in April, about 9% below 2022 average pre-war levels of 89,000 tons.  In the four weeks following the Feb. 24 invasion of Ukraine, Russian cargoes averaged 146,000 tons a week, as the anticipation of sanctions likely encouraged earlier delivery of contracted shipments.

New inflow is expected to slow this week, with three, as opposed to last week’s 10, Russian vessels (about 75,000 tons of fertilizer) en route to Brazil.  Securing enough fertilizer for the 22/23 crop is a top priority for Brazil.

The DD50 Rice Management Program is live and ready for fields to be enrolled for the 2022 season.  All log-in and producer information has been retained from the 2021 season, so if you used the program last year you can log in just as you did last year.  Log in and enroll fields here:  https://dd50.uada.edu.