“Long as I remember, the rain been comin’ down, clouds of mystery pourin’, confusion on the ground, good men through the ages, tryin’ to find the sun, and I wonder, still I wonder, who’ll stop the rain?”

Close Only Counts in Horseshoes and Hand Grenades

We keep getting very close to a big run at rice planting only for it to be rained away.  A small amount of rice planting has happened to date with the state officially 2% planted as of Monday.  More planting was occurring over the weekend that likely wasn’t captured in that number, and there was a good push in areas on Monday thru Wednesday morning.

Surprisingly, rainfall amounts on Wednesday were even more variable than expected, with some locations receiving virtually nothing and some spots getting 2.5 inches.  With that, planting resumed on Thursday in some isolated areas.  Of course, we’re staring at a delta-wide rainfall event tonight (Friday) with 0.5-1.5 inches expected.

It’s still early, but everyone is itching to get on a run.  There may be some drier weather in store next week, but it may have cooler temperatures along with it, which means drying conditions may be a toss-up.  Attitudes are generally more positive this year at this time than the past couple of years, but that could change quickly if conditions don’t improve.

We’re about to start entering the thick of the calendar where acreage competition heats up.  That is, corn and rice need to start getting put in the ground to hold their acreage intentions before planting dates dictate a move toward soybean.  However, as sometimes happens, corn acres can swap to rice, then rice acres to soybean, as the calendar progresses.

A lot of our focus in rice residual herbicide programs is placed on grass control, especially as barnyardgrass is consistently listed as the most problematic weed across Arkansas rice acres.  However, other troublesome weeds like certain broadleaves (dayflower, smartweeds, hemp sesbania, etc.) and sedges can cause headaches for rice growers and consultants.  As a result, there have been several questions about moving up some herbicides with residual activity that are typically used POST into our PRE programs.

Herbicides such as Permit, Permit Plus, Gambit, Grasp, Facet, and Sharpen have residual activity, will control broadleaves and sedges, and can be applied both PRE or POST in rice.  Based on university research, we tend to recommend saving Permit, Permit Plus, Gambit, and Grasp for POST applications and using Facet and Sharpen in PRE applications.  This is for several reasons.

Facet provides us broad-spectrum control of broadleaves, annual sedges, and barnyardgrass, so it acts as a “catch-all” type herbicide which is very important at the beginning of the season in our PRE programs.  Additionally, although there are increasing instances of barnyardgrass resistance to Facet POST, it still provides residual PRE activity in most cases.

Sharpen is often recommended as a PRE due to its residual activity on broadleaves (especially Palmer amaranth in row rice) and annual sedges.  From a residual standpoint, it may be slightly weaker on broadleaves such as smartweeds, dayflower, or hemp sesbania (coffeebean) than the ALS-inhibitors (Fig. 1), but the ability to use 3 fl oz/A PRE versus 1 fl oz/A POST makes it more effective as a PRE to manage these weed species.  ALS-inhibitors are much more effective POST on these weed species, and if we move these herbicides into our PRE programs, we may lose them as an option POST due to season-use limitations.  For example, the season limit for Gambit is 2 oz/A.  If we use that rate PRE, we no longer can spray Gambit POST for any escapes (which are visible in Fig. 1).  Also, from a herbicide resistance standpoint, it is NOT recommended to solely rely on a single herbicide group, so having Sharpen (PPO-inhibitor) PRE followed by an ALS-inhibitor POST gives us sequential levels of control, while also aiding in resistance management.

Sedges continue to climb the list of most problematic weed species in Arkansas rice.  Across the state, most populations of annual sedges are now ALS-inhibitor-resistant so having Sharpen or Facet (or Bolero) PRE provides more control than the ALS-inhibitors.  With yellow nutsedge, the best options for control are solely the ALS-inhibitors, but again due to season use limitations, it is our recommendation in areas with a heavy infestation to use League as the PRE residual, and save Permit, Permit Plus, and Gambit for the POST applications to eliminate any escapes.

Overall, there are several options available to successfully manage broadleaves and sedges in rice.  For herbicide resistance management and to maximize the effectiveness of each individual herbicide, we recommend using Facet and Sharpen as PRE’s, and saving the ALS-inhibiting chemistries for overlapping residual/POST applications.

If you have any questions, please don’t hesitate to reach out to our Arkansas Weed Science team, and good luck out there!

The past few years of increased rainfall and persistent wet conditions have resulted in some rice fields that haven’t dried out for multiple years.  As a result, we’ve received some calls on problematic water-dependent weeds, specifically common cattail (Fig. 1).

Common cattail is a perennial, aquatic weed.  Although it appears grass-like, it really is more like a bulrush.  Common cattail is also characterized by large, creeping rhizomes which make this weed extremely troublesome to achieve long-term control (Fig. 2).

Unfortunately, there are no great, simple options to control common cattail in rice.  There are limited herbicides to suppress cattail throughout the growing season, and it will require several sequential applications throughout the season; however, this most likely will still not completely kill the weed, especially the underground rhizomes.  In severe infestations and for complete, long-term control, the best option may be to fallow the field for a year, dry it out, and dig out/remove all rhizomes from the soil.

As far as herbicide options for controlling common cattail, first and foremost it is recommended to grow a FullPage hybrid.  Some previous research conducted by Dr. Bob Scott illustrated the most effective herbicide for cattail control was imazamox (Postscript).  With recent changes in Postscript’s labeling, the FullPage system allows for 3 sequential applications at 5 fl oz/A.

Other herbicide options that have provided some effective control of common cattail in order of their effectiveness were: Grasp (2 oz/A) + Regiment (0.4 oz/A), Propanil (4 qt/A) + Facet (43 fl oz/A), 2,4-D (3 pt/A), and Aim (1.25 oz/A).  However, these options come with their own challenges.  Grasp + Regiment and Propanil + Facet both may lead to potential rice injury through either an overload of ALS-inhibiting chemistry or delayed phytotoxicity syndrome (DPS), respectively.  2,4-D is limited to a very tight application window within our rice crop.  Aim may help burn back cattail vegetation, but as a contact herbicide, it will probably have very minimal influence at controlling cattail from a long-term standpoint.

Overall, the FullPage system with multiple, sequential applications of Postscript is the best option for controlling cattail throughout the rice growing season and may help with some long-term control.  There are a few other herbicide options that can be used to assist with control; however, they have the potential to cause rice injury.  Effective long-term control will require the removal of the extensive rhizomes of common cattail. 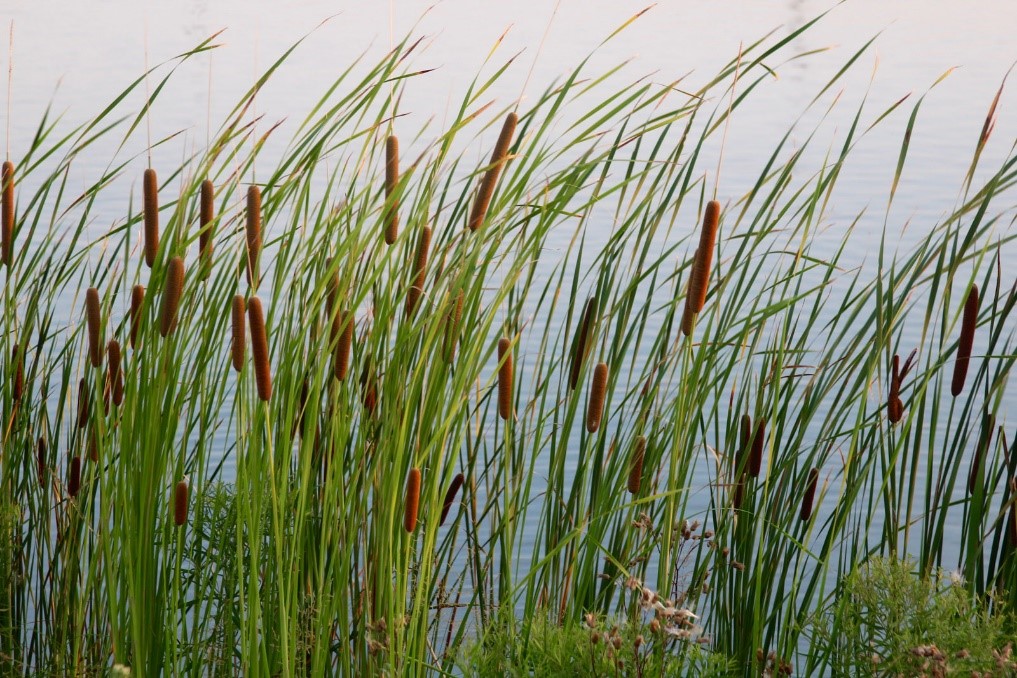 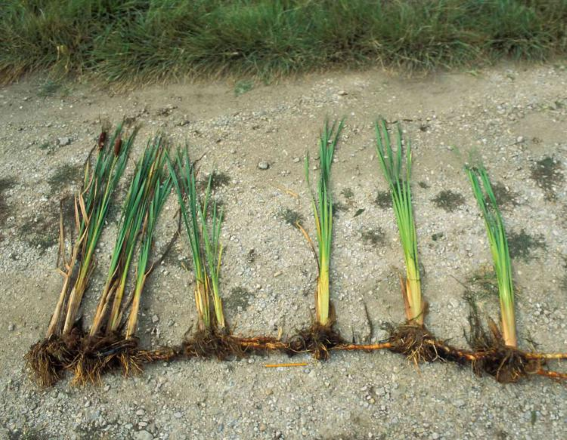 Imports of long-grain were lowered .5 million cwt., reducing total supply to 216.8 million cwt.  Domestic and residual use was lowered by 2.0 million cwt to 123.0 million, which is still a record.  Exports were also reduced by 2.0 million cwt to 63 million.  Marketing year to date, long-grain milled sales and shipments are running 32% behind last year.  Export demand in the current marketing year has been primarily for rough rice with sales up 7% over a year ago.  Rough rice exports got a boost from Brazil purchases early in the 2020 marketing year.  However, the last US sale to Brazil was during the week of November 5, 2020.  Total sales to Brazil of 120,150 mt have all been shipped.  The biggest year-to-year increase in rough rice sales has been to Venezuela.  Sales of 213,990 mt are up 159,362 mt from last year.  Iraq is the missing piece for 20/21 milled sales.  At this point last year, the US had sold over 154,000 MT to Iraq—nothing to report so far in 21/22.  Haiti remains the dominant milled destination with 62% of US business, but sales there are down 16% from a year ago.

As of Sunday, the USDA reported 14% of the US rice crop had been planted, slightly behind the five-year average.  Planting is well advanced in the deep south with Texas and Louisiana beyond the halfway mark.  Arkansas and Mississippi have made a start with more progress made early this week.  Midweek rains stopped fieldwork Wednesday evening.  More showers could follow Friday evening into Saturday morning.  Cooler temperatures are expected next week in the Delta with lows dipping into the mid to upper 40s.

Chicago rice futures traded higher this week. September futures closed at $13.075 ($5.88/bu.) on Thursday—up from $12.93 a week ago.  The September contract extended its trading range above $13/cwt. following the March Prospective Plantings.  USDA’s survey found US long-grain acreage would be down 11% from last year.  Arkansas’ long-grain acreage is expected to be down 15 percent.  In the cash market, basis for fall delivery to driers is in the range of 16 to 23 cents per bushel under September futures.  Basis for delivery to mills is 9 cents per bushel under.

USDA’s April adjustments to the long-grain balance sheet were bearish and another downward revision in exports may be coming in the months ahead if milled sales do not develop.  Next week it will be interesting to see if rice futures can ignore the heavier ending stocks projected this month.

The long-term chart below provides some historical perspective for September rice futures.  Note the limited time the September contract has traded at $13 or better since 2015.  The October 2015 high of $13.28 could serve as the next price objective for September ’21 futures.  It could also serve as lasting chart resistance.  Planting progress is of keen interest to traders right now and April can still deliver some disappointment.  At the same time, long-grain ending stocks look to be heavy this year.  Consider this in your plans to manage price risk and remove some risk when prices are historically high.