As we approach grain sorghum harvest, many are considering using a harvest aid.  There are pros and cons to using a harvest aid.  The greatest benefits are that they can dry down green plant and or weed material to allow quicker, more efficient harvest.  Harvest aids can also shut down the plant and prevent late sucker head development which sometimes can cause harvest issues, especially if sucker heads are allowed to form late maturing grain.  The downside of using a harvest aid is the risk of applying too early and reducing yield and quality of the grain.  Another potential problem is the unknown factor about what the weather will be like at harvest once a harvest aid has been applied.  Once fields have been sprayed with a harvest aid, they should be harvested timely.  Delaying harvest due to weather or other unforeseen factors can increase lodging problems, which will reduce yield.  Harvest aids are also an added expense that is not always needed.  Harvest aids will dry leaves and reduce the green material going through the combine, but generally will have minimal to no impact on actual grain moisture.

Products Available to Use as Harvest Aids

Glyphosate and sodium chlorate are the main products used. The aim is also labeled as harvest aids in grain sorghum for desiccation of morning glories and other vines. Gramoxone (paraquat) is NOT labeled as a harvest aid in grain sorghum.   In recent harvest aid studies, glyphosate (Roundup Powermax 22oz/A) has provided the best overall kill of the plant, including desiccation of young green sucker heads. Glyphosate has a 7-day pre-harvest interval, and once applied, fields can be harvested approximately 10 days after application if grain moisture is low enough. Glyphosate can be applied to grain sorghum that is mature (30% moisture) but applying when grain moisture is near 25% moisture will likely minimize the amount of time the plant has to stand in the field waiting for the grain to dry to a dry level of 14%.

Sodium chlorate (3qt/A) is applied closer to harvest, generally 5 days prior to harvest, and grain moisture should generally be less than 20%. Hot and dry conditions are typically needed for the best performance of sodium chlorate. There has not been a great benefit of tank mixing glyphosate and sodium chlorate unless honeydew from sugarcane aphids is present. If honeydew levels are high, adding 1% crop oil to the glyphosate/chlorate mixture may improve desiccation results. If vines or other broadleaf weeds are present, tank-mix 1.0-2.0 oz/A Aim plus 1% crop oil with the glyphosate application.

Harvest aids should only be applied to mature grain sorghum.  At physiological maturity, grain will be approximately 30% moisture.  In evaluating maturity, examine the lower portion of the head, since the kernels at the bottom of the head will be the last to mature.  If the bottom kernels are still watery, a harvest aid application needs to be delayed until the kernels are more mature.  Kernels will develop like corn with a starch line moving from the top of the kernel to the bottom.  Once the kernel is mature, a black layer will be evident at the base of the kernel (Figure 1).

Figure 1.  Full black layer is evident on the left kernel indicating maturity; the middle kernel has a partially developed black layer, while the right kernel has not developed a black layer and is not mature.  These kernels were from the top, middle, and bottom of the same head.

Keep in mind many fields have a range of maturity which makes timing a harvest aid difficult.  If large areas of fields are much later in maturity (ie, replanted, or wet areas of fields), applying a harvest aid too early will likely reduce yield and quality in those areas.  Figure 2. below shows grain sorghum that is not mature and should not have a harvest aid applied since a majority of the kernels are still green and not mature.  Figure 3. below shows heads with grain that is mature from the top to bottom of the head and would be considered plenty mature to safely apply a harvest aid if desired. 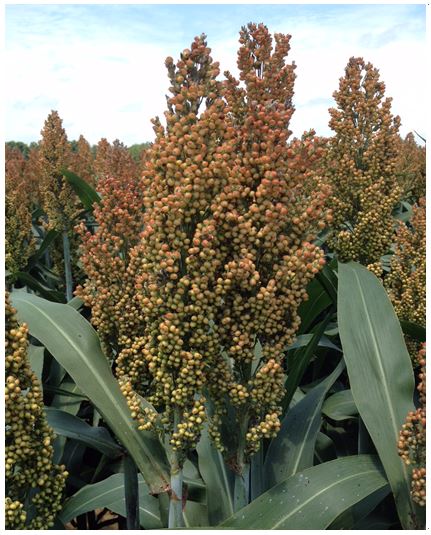 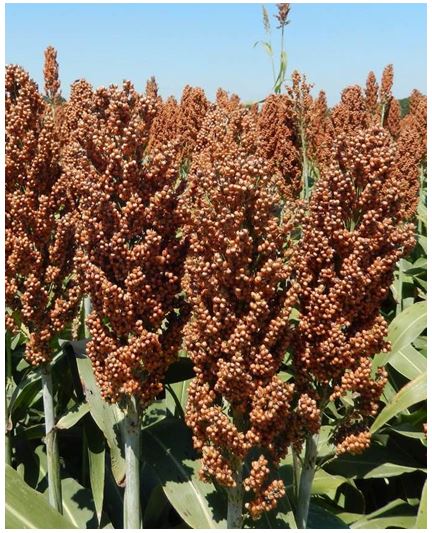 In some cases in past years, applying a harvest aid such as glyphosate or sodium chlorate in the presence of heavy sugarcane aphid populations has caused the aphids to move up into the head. This has the potential to cause harvest issues, including increased time and costs to clean the harvester and reduced harvest efficiency.  Spraying Transform or Sivanto Prime insecticide with glyphosate in past years has worked well.  Keep in mind Transform and Sivanto have a 14-day pre-harvest interval.

Other considerations – If grain sorghum is going to be sprayed with a harvest aid, spray only what you are capable of harvesting in a couple of days.  Don’t spray all of your acreage at once and then not be able to harvest timely.  Once a harvest aid has been applied and grain moisture is down to an acceptable level, it needs to be harvested timely.  In past years if sorghum is left standing in the field 2-3 weeks after a glyphosate application, lodging potential increases dramatically.  Once a harvest aid is applied, you are committed to harvesting timely.